Businessman offers 1 lakh if murderers of Karthik are arrested

Mangaluru: With Mangaluru city police allegedly making no headway in the case of murder of engineer Karthik Raj in Konaje, an entrepreneur has announced Rs 1 lakh cash award to police, if they arrest culprits within a month. 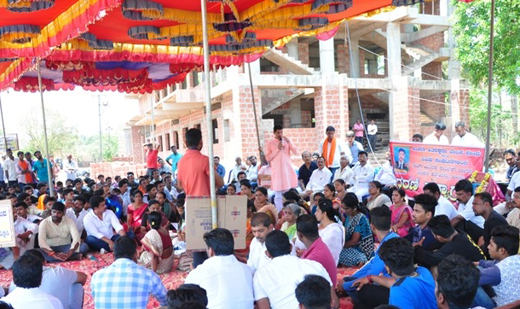 The announcement was made on Sunday by Prakash Shetty, businessman and a resident of Assaigoli, during a protest organised to urge police to speed up the investigation. The day-long protest was held in front of Konaje police station.

"It has been five months since Karthik Raj was brutally murdered just a few meters away from the jurisdictional police station. However, police have not made any breakthrough so. We suspect vested interests trying to divert investigation. If they arrest the real culprits in a month, I will give them a cash reward of Rs 1 lakh," he said.

Dakshina Kannada MP Nalin Kumar Kateel, who spoke on the occasion, criticised the state government over killing of innocent Hindus and delays in arrests. He said that many Hindu youths have been assaulted and killed in Ullal area in the recent past.