Kasargod: Kerala Chief Minister Pinarayi Vijayan and Karnataka Chief Minister Siddaramaiah unveiled the memorial of Rashtrakavi M. Govinda Pai here on Thursday. The two Chief Ministers promised support to develop the place into a destination of multilingual activities as it was during the days of the great writer. 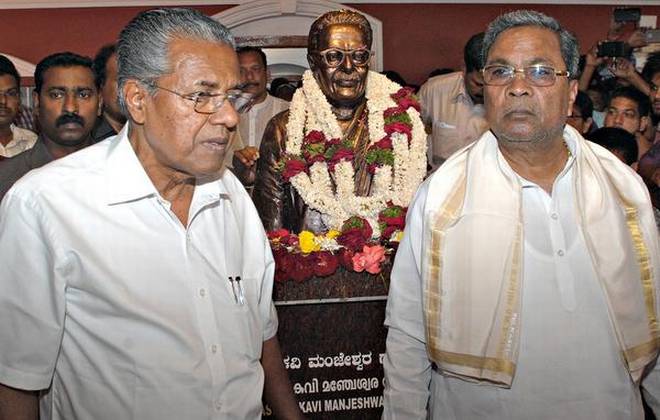 The two governments have provided funds to Rashtrakavi Govinda Pai Memorial Trust to renovate the house of the writer — the first Rashtrakavi from Karnataka. This renovated house has been named ‘Gilivindu’, which is the title of the first collection of poems of this multilingual writer.

Vijayan said the memorial was the fine example of a good work that two governments can do if they come together. The land of Manjeshwar has fond memories of the great writer who was on par with Max Muller in his thinking. Govinda Pai had mastery over 22 languages and his works are known for communal harmony. This memorial would sound warning to organisations that fight for protection of language and culture, he said.

Siddaramaiah thanked the Kerala government and Keralites for making the memorial a reality. Through his works, Govinda Pai showed the ancientness of Kannada and this helped in getting the classical tag for the language.

Siddaramaiah acknowledged efforts put in by M. Veerappa Moily, president of the memorial trust and MP, in getting funds. He also lauded the support for MP for Kasaragod P. Karunakaran and MLA for Manjeshwar P.B. Abdul Razak for the project.