Mangaluru: BJP MLA CT Ravi lauded Basavaraj Rayareddy, minister for higher education for his candid admission on financial misappropriation in 17 state universities to the tune of over Rs 500 crore. He demanded that the minister order a probe by a sitting judge of Karnataka High Court into the matter. 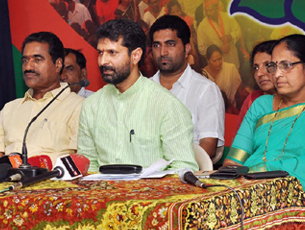 "The present Congress government in Karnataka is solely responsible for this rot in higher education sector that started with then Governor H R Bharadwaj. He had put the post of vice-chancellors of state universities for sale based on caste, creed and money power of the aspirants," Ravi said.

Urging Rayareddy not to stop with admission of the rot, Ravi urged him to reveal the number of cases registered against corrupt university officials since the Congress came to power in the state and what action has been taken against them.

"People of the state should be convinced that the government is serious about addressing the issue and this should be seen in the decisive actions being initiated against corrupt university officials," he added.