Mangaluru: Mangalore University Vice Chancellor, Prof K Byrappa was conferred with CV Raman Award from Prime Minister at Indian Science congress conference being held at Tirupati. He has been awarded for his contribution to science and technology research. 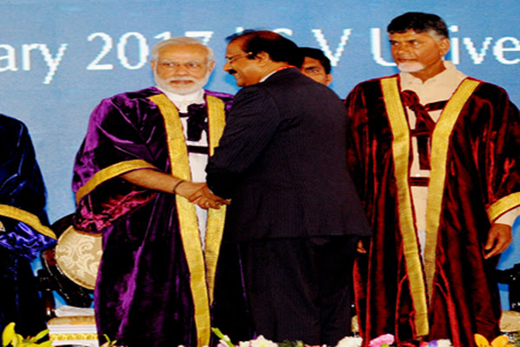 Prof. K Byrappa had his early education in Mysore and obtained M.Sc. degree in Geology. He received Ph.D. in 1981 from Moscow State University, Moscow, Russia. He served the University of Mysore as Lecturer, Reader and Professor for 31 years and in various other administrative fields for 9 years. He was the founder Coordinator of M.Tech. in Materials Science, Chief Coordinator of University with Potential for Excellence, Founder Director of Internal Quality Assurance Cell, Director of UGC Academic Staff College and Chairman of Department of Studies in Earth Science at University of Mysore.

As well known researcher, he has over 290 research publications in reputed International Journals and over 30 Book Chapters & Reviews. He has edited 6 books and authored a famous Handbook of Hydrothermal Technology, published by Elsevier Publishers, UK published in 2 editions. He is the Editor-in-Chief of British Journal “Materials Research Innovations”, Senior Associate Editor of Journal “Progress in Crystal Growth and Characterization of Materials”, from Elsevier Publishers and Editorial Board Member of three more International Journals published from Abroad. Prof. Byrappa has more than 4000 citations to his credit and is also known as a world authority in hydrothermal technology.

He has completed 15 Major Projects worth of more than Rs.70 Crores grants from UGC, DST, DRDO, DAE and Ministry of Environment and Forest. He has also operated an International Project of1.2 Million US Dollars during 1998-2002, and trained many of his colleagues and students in Japan.

Recognizing his merit and contributions to higher education Prof. Byrappa was appointed as Vice Chancellor of Mangalore University in June 2014 a responsibility he took over on 5th June, 2014, and since then provided a new direction to Mangalore University.