Farmers unhappy with fiat to cut off power supply to pumpsets

Udupi (The Hindu) Electricity restored after Udupi Zilla Krishik Sangha stages protest. Farmers living in the Baje-Hiriyadka belt are sore over the district administration’s fiat to cut off power supply to irrigation pumpsets which pump water from the Swarna to save water at the Baje reservoir to supply drinking water to Udupi city. 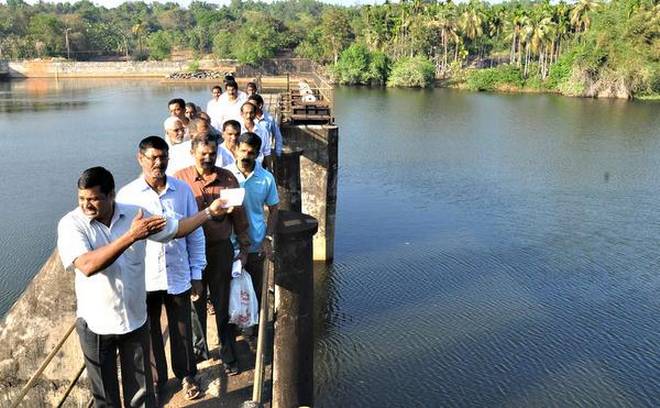 These farmers reside on the right and left banks of the river in the upper reaches of Baje reservoir. Normally, the administration used to restrict power supply to the pumpsets in this belt from April onwards to ensure drinking water supply to the city in the summer.

However, on account of deficient rainfall this year, the administration has issued an order to Mangaluru Electricity Supply Company (MESCOM) to cut off power supply to the pumpsets from January 2 itself this year.

MESCOM personnel cut off power supply to 25 pumpsets in the Perdoor region on Monday morning. However, owing to protest by the Udupi Zilla Krishik Sangha, power supply was restored by Monday evening. But as the order has not been withdrawn, the farmers fear that it could be implemented again any time.

According to the sangha, there are 68 irrigaiton pumpsets operating in the backwaters of the Baje dam. Of them, 27 are on the right bank, while 41 are on the left bank of the river. The water from these pumpsets are used to irrigate 44,639 arecanut trees, 11,769 coconut trees, 17,850 banana plantations, 180 acres of paddy fields and 6.37 acres of vegetables.

“If the administration cuts off power supply to the pumpsets so early, then it will badly hit our agricultural and horticultural crops. We cannot drill any well or bore-well now,” said Prasanna Pandit, farmer from Munduje.

“Most of the water we use in the fields gets percolated into the soil and joins the water table of the river. We water our coconut and arecanut trees and do not cultivate paddy from February to June,” said Sarvottam Shetty, farmer from Manai.

“The water overflows from the Baje dam till March. Hence, there is no point in restricting its use. The loans taken by farmers here amounts to ? 2.21 crore and they have to pay ? 1.07 crore as interest which comes from the crops they grow,” said Kudi Srinivas Bhat, another farmer.

“The government should build a dam at Parika downstream Baje and at Bavukadi upstream Baje to meet the increasing water needs of Udupi city instead of punishing the farmers,” said Ramakrishna Sharma, president of the sangha.

Meanwhile, the administration has called a meeting on January 5 to discuss the issue.