Mangaluru: Fr John Crasta, a priest of the diocese of Jamshedpur has been appointed as the new president of the faculty of theology, St Albert’s College, Ranchi, Jharkhand on February 22. 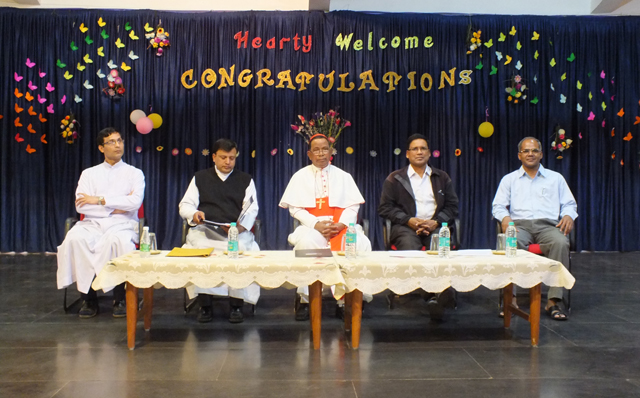 Telesphore Placidus Cardinal Toppo, the archbishop of Ranchi and the chancellor of St Albert’s College, at a function held in the college auditorium, officially declared the appointment of Fr John Crasta as the new president of the faculty. The term of office of the president is three years, which is normally extended for another term of three years. As president, Fr John Crasta will head the academic formation at St Albert’s College. Fr John Crasta is a native of Christ the King Church, Kayyar. He succeeds Fr Suman Kumar Ekka, who had been the president of the faculty since February 2011.

In his brief address, Fr John Crasta reminded the students that they are called to deepen and interiorize the message of the Gospel. This is possible when there is total commitment and a readiness to surrender oneself to the task. The mission of the priests today is to be prophets of change in a world of godlessness, poverty, injustice and violence. The onus is on the staff to train seminarians to shoulder this challenging ministry.

Telesphore Placidus Cardinal Toppo in his message highlighted the fact that St Albert’s College has been a missionary seminary. It has produced thousands of priests and many bishops who have been missionaries in places where Gospel message had not taken roots. The cardinal exhorted the staff and students to ensure that the missionary aspect of the seminary remains intact.

St Albert’s College, the philosophical and theological seminary of east India was established in the year 1914 to cater in a special way to the tribal students of Jharkhand and the neighbouring states. By a decree dated August 15, 1982, the Sacred Congregation for Catholic Education (Rome) erected the faculty of theology Ranchi, which enables students of theology to obtain the licentiate, and eventually the doctorate in sacred theology. As of today, the faculty awards the following degrees: Bachelor of Philosophy (B.Ph.), Bachelor in Sacred Theology (B.Th.), Licentiate in Contextual Theology (M.Th.) and Doctorate in Theology (Phd). There are 210 students at St Albert’s College in the current academic year.