Mangaluru (The Hindu): Kavita Sanil of the Congress was elected Mayor of Mangaluru in the elections here on Thursday. Rajaneesh K. of the same party was elected unopposed Deputy Mayor. Both of them are Commerce graduates and their term would end on March 8 next. 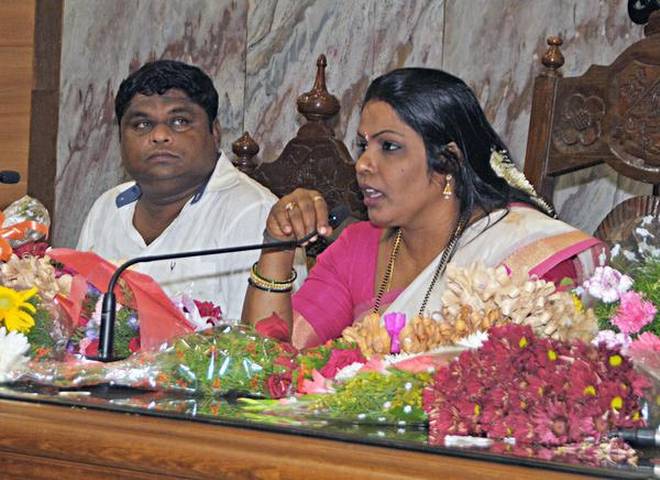 Ms. Sanil defeated Poornima of the BJP by 38-20 votes. The BJP did not field its candidate for the office of Deputy Mayor reserved for a Scheduled Castes councillor as it did not have any candidate from the category. The office of Mayor had been reserved for a woman councillor from the general category. M.V. Jayanthi, Regional Commissioner, Mysuru, conducted the elections.

The House had 65 voters, including 60 elected councillors, two MLAs, two MLCs and one MP. Of them Revathi K., an Independent councillor, Ganesh Karnik, MLC, and Nalin Kumar Kateel, MP, did not participate in the voting. Two councillors of the Janata Dal (Secular) and a councillor each from the Communist Party of India (Marxists) and Social Democratic Party of India (SDPI) remained neutral during voting.

The selection of the Mayoral candidate was not smooth for the ruling Congress enjoying majority in the council. Two factions among the party councillors forced the party to conduct an internal voting on Wednesday to select the candidate. While one faction was opposed to the candidature of Ms. Sanil, the other faction wanted the party to field Prathiba Kulai, a first-time councillor from the Hosabettu ward. The party chose to field Ms. Sanil following the results of internal voting.

Immediately after the declaration of election results by the Election Officer in the council on Thursday, Ms. Kulai left the hall. Some Congress councillors also followed her. A few councillors of the Congress and the Opposition BJP later congratulated her.