Sullia: The vented dam built two years ago at Doddadka in Ubaradka village near Sullia has collapsed due to poor construction work. The dam was constructed under the 2013-14 minor irrigation project, across Kandadka stream at a cost of Rs 47 lakh. Shashidhar of Aletti was the contractor for the project. 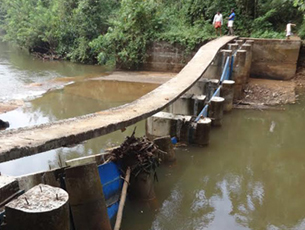 Due to incomplete work, the water was not collected in the dam. Minor Irrigation department installed a plank last year and the water was collected in one fourth portion of the dam. New planks were installed on November 30, but as the work was defective, water leaked through the planks. On December 1, three fourth of the vented dam was filled. At 3 pm, the pillars of the dam collapsed suddenly and the planks have been washed away. The pedestrian path has been broken and suspending.

Minor Irrigation department executive engineer Prakash, assistant executive engineer Shanmukha and junior engineer Parameshwara visited the spot and carried out an inspection. The villagers took the officials to task. Engineer Prakash said that as the soil is sandy, the seepage might have resulted in the collapse of the pillars. An investigation will be conducted and the action will be initiated against the persons responsible for the poor construction.

Gram panchayat president Harish Ubaradka said that on the recommendations by the MLA, the Minor Irrigation department had constructed the vented dam for irrigation purposes. But due to poor construction, the dam has collapsed and is of no use.