Mangaluru: Podar International School, Mangaluru celebrated its first annual Day on Friday, 23rd December at the school premises. With the theme 'A time to celebrate', young kids displayed their talent impressing everyone gathered. 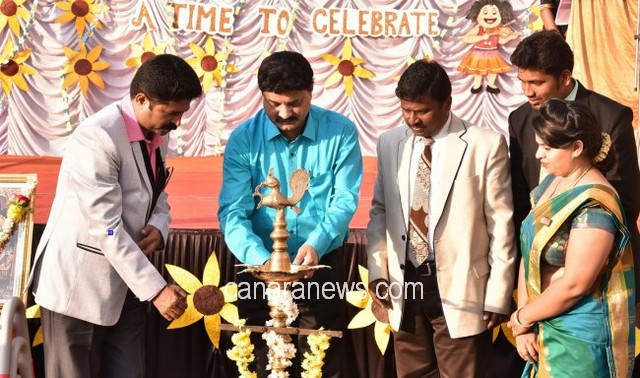 The programme started with a Saraswati Vandana and lighting of the lamp by the chief guest, Karnataka Rajyotsava Puraskrutha Manohar Prasad, chief of News Bureau, Udayavani. In his speech he addressed the parents and children, and made an observation of declining humanitarianism in the era of modernisation. He lauded Podar Institute for developing children with good social values, where they have established both in academic and the extra-curricular front.

Podar Jumbo Kids wing of Podar International School celebrated the day with the cultural extravaganza 'Jumbo's Incredible World Annual Concert'. Headmistress Rima recalled the words of Gandhi 'Real education consists in drawing the best out of yourself' and said, "We aim for 'real education' at Podar Jumbo Kids. We don't test or rank children or make them aware of their faults and weakness. Instead, we help them identify their potential and create happy learners through the 'Head, Heart and Hand philosophy' of Gandhi."

A rich blend of colour, music and light for dance, music and drama, was an experience to cherish for the audience. Students performed dances traditional to Sindhis and Kashmiris and depicted the ebullient new year celebrations in South Africa.

History of the Insitute

The Educational Complex was founded under the inspiration of late Sait Anandilal Podar in 1927, as a small exclusive school for those who wanted to impart quality education.

In 1930, Gandhi and Sait Jamnalal Bajaj, owing to their political pre-occupation, retired from the trusteeship of the Society, and Pandit Madan Mohan Malviya became the president of the Society, till his demise in 1946. Thereafter, the Society was guided by Raja Ramdeo Anandilal Podar.

Podar Education Network has, from the very beginning, been focused, driven and motivated by values integral to Indian tradition - honesty, integrity and service. It has managed to implement its vision of creating 'global citizens' year by year. The father of our nation, Gandhi as the very first President of the Podar Trust stands testimony to this fact.

Principal read out the annual report and cherished the success of the year. The programme concluded with the national anthem and a brief celebration of Christmas.