Mangaluru: A Shama Rao Foundation was established in 1988 with avowed aim of imparting education which could mould the character of the students and make them responsible citizens of the country. It was the firm belief of the founder Adka Shama Rao that education the tool to transform society is education. Today the foundation sponsors a plethora of educational institutions imparting education in technology, medical sciences, dental sciences, hotel management, hospitality sciences, pharmacy, business management, nursing, and education. The foundation is ably led by C A A Raghavendra Rao and A Srinivas Rao. 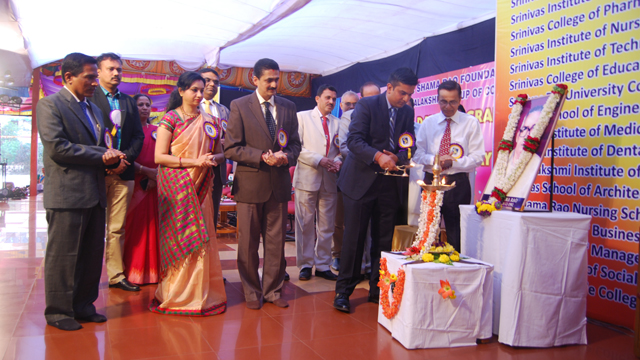 A cultural and prize distribution programme were organized at Srinivas Campus, Merlapadav, on February 16. Bhargav Dave, physical therapist, research scientist (DMCR), United States was the chief guest. Bhargav Dave said, "Students dream big and achieve success in life. He asked the students to follow the good example set by others and to inculcate good values in life. He appealed to them not to be afraid of failure as failure is the stepping stone to a successful life.

Text books authored by Bhargav Dave titled 'Heat and Human Interaction' and 'Stem Cells: A Hope in Cardiology' published by Srinivas University Press were released on the occasion.

C A A Raghavendra Rao, chancellor of Srinivas University and president of A Shama Rao Foundation, in his presidential address motivated the students and asked them to set goals in life and accomplish them by hard work. He also said that the future of every individual is in his hands. He appealed to the students to be humble, respect their elders and teachers even after they become successful.

All the students of Srinivas Group of Colleges participated in the function. The student achievers who excelled in academics and extracurricular activities were awarded at the function. A variety of cultural programmes were performed by the students.

Dr A Srinivas Rao, pro-chancellor, Srinivas University, vice president, A Shama Rao Foundation asked the students to be focused, humble and grateful in life. A Mitra S Rao, board of governors, Srinivas University, secretary, A Shama Rao Foundation, was present. Dr Ajay, PRO, Srinivas Group of Colleges welcomed the gathering. Dr Shrinivasa Mayya D, convener of the programme and principal of Srinivas Institute of Technology delivered the vote of thanks. Principals of all the colleges under Srinivas Group of Colleges were present.