Mangaluru: The Popular Front of Inda (PFI) and the Social Democratic Party of India (SDPI) on Wednesday November 30 jointly organized a protest near DC's office here demanding judicial probe into the murder of undertrial Mustafa in Mysuru prison recently. They also demanded a compensation of Rs 50 lac for Mustafa's family. 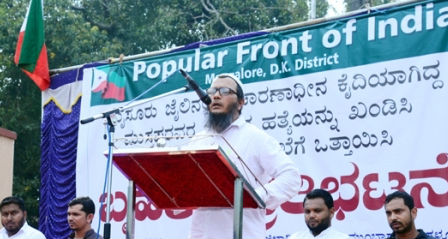 Mustafa Kavoor, who had been arrested for the murder of flower vendor and right-wing activist Prashant Poojary in Moodbidri last year, was stabbed to death allegedly by another undertrial Kiran Shetty in Mysuru prison on November 10.

Addressing the protest, national secretary of SDPI Ilyas Mohammed Thumbay said, "Muslims, Christians and Dalits are being systematically and continuously targetted, as they are from the minority. The state government must stop this first."

"The police department releases the photos of most wanted criminals, but in this list only the photographs of those from the minority community are displayed and not of those from the majority community, especially those who have Sangh Parivar background. Even activists of Sangh Parivar commit crimes, and have been wanted in many cases, but why is it that only Muslim youths are targetted?" he questioned.

In a memorandum addressed to the chief minister, the PFI stated that judicial probe should be ordered into Mustafa's murder as there was dereliction of duty and failure on the part of the jail officials and security guards. The memorandum also called for investigation into people who had visited the jail or contacted Kiran Shetty in the days leading to the murder.