Mangaluru: The inauguration of classes for first year BE, for the academic year 2016-2017, at St Joseph Engineering College – Vamanjoor, here was held on August 1 at 9.00 am at Kalam Auditorium of Academic Block II. The inaugural ceremony was attended by all the first year students along with their parents.

Preetham D’Souza, first officer at Jet Airways and an alumnus of SJEC, from the class of 2009 in Electrical and Electronics Engineering, graced the occasion as the chief guest. Fr Rohith D’Costa, assistant director of SJEC, presided over the ceremony. Dr Joseph Gonsalvis, principal – SJEC, Dr Rio D’Souza, vice principal – SJEC and Dr Ramananda H S, professor and head of the department of mathematics and convener of the ceremony, were the other dignitaries on the dais. 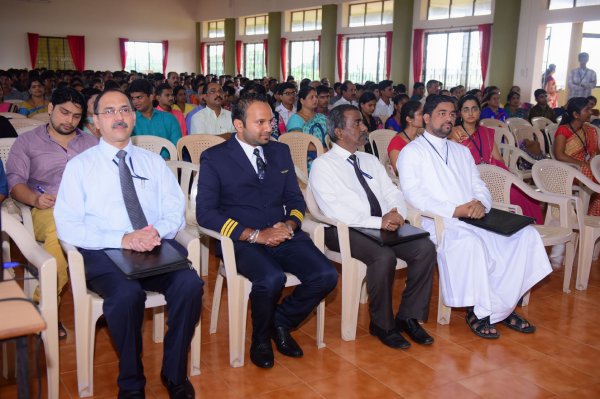 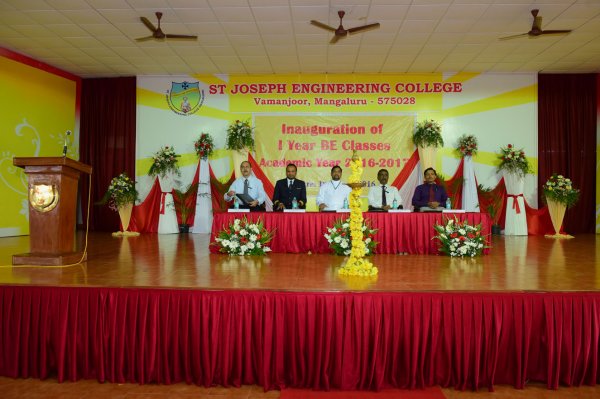 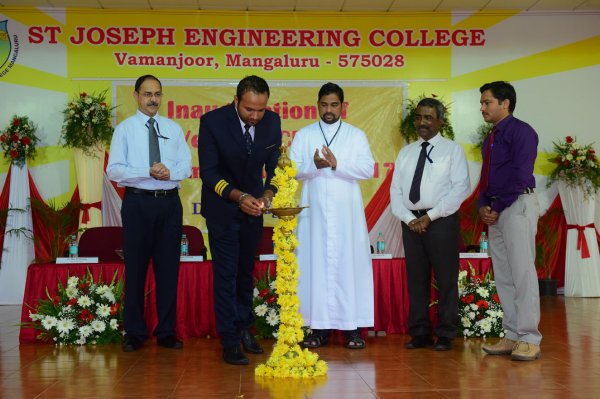 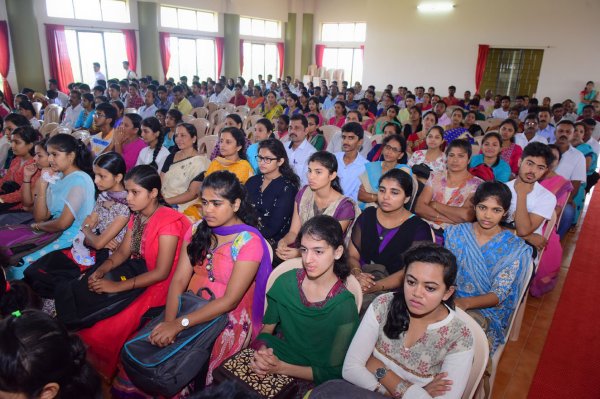 Dr Rio D’Souza welcomed the gathering to the inaugural ceremony. In his welcome address, Dr Rio D’Souza used the famous story of Michelangelo’s sculpture of David to impress upon the students their responsibility of sculpting their own career by removing what they do not want in them. He mentioned the need for students to make correct decisions in life as there are no undo options in life. The welcome address was followed by the lighting of the traditional lamp by the dignitaries and students’ representatives from first year.

Dr Joseph Gonsalvis addressed the gathering and welcomed the new batch of students to the family of Josephites. He highlighted the necessity of students following the rules and regulations of the college in transforming themselves into professionals. His address also touched upon the distractions faced by students with regard to social media, telephone etc and the challenges faced by the institution and the parents in leading the students on the right path.

A symbolic inauguration of classes for the new academic year was performed with students’ representatives from individual departments, each handing over a bunch of balloons to the chief guest, which was then passed on to the convener, Dr Ramananda H S, symbolizing the flight of excellence.

Sangeeta Ferrao, placement officer of SJEC, introduced the chief guest Preetham D’Souza to the gathering. Preetham D’Souza, after his graduation as an electrical engineer from SJEC in 2009, has worked as an engineer in ICA a packaging machine manufacturing company in Italy. He is also the founding member and secretary of the Torch Trust, a registered Students’ NGO in the city. He completed his pilot training course from United States and holds the record for flying solo in 10 days and obtaining the license in 67 days. He has worked previously with Spice Jet and is currently the first officer with Jet Airways.

Preetham began his address by welcoming, on behalf of the entire Josephite community, the first year students to SJEC. He reminisced his initial days at SJEC and spoke about how the decision to SJEC has changed his life for the better. To the newly joined students, Preetham asked them to follow their passion and not just academic grades. He spoke of the necessity of gaining practical knowledge and asked the students to use the laboratories and workshops effectively. He stressed on the need for students to keep themselves busy and stay focused for the 2500 weekends students will get in their 4 years engineering programme. He congratulated the parents for making the right decision in sending their ward to SJEC and requested the students to do justice to their parents’ hardships and sacrifices. Preetham concluded by sharing with the students, his recipe for success: the 3H rule, which stands for: H – Honesty, H – Hard work, and H – Happiness to you and others. He wished the students very happy and academically rewarding years at SJEC. Academic excellence awards were also given by the chief guest to the students from various streams.

In his presidential address, Fr Rohith D’Costa welcomed the first years to the SJEC family and spoke of the commitment of the institution to provide quality education to its students. Father D’Costa highlighted the key achievements of SJEC in terms of academic excellence, campus placement record and the NBA accreditation of its programmes. He also highlighted the importance of students adhering to the traditions and value systems of SJEC and to take part actively in transforming themselves into excellent professionals. He also stressed on the need to be careful in getting influenced by only good things around us and not to get addicted to distractions and to lose focus on the job at hand. Fr D’Costa wished all the first year students the very best in all their academic endeavors in SJEC.

The vote of thanks was offered by the convener Dr Ramananda H S. Sheetal was the emcee of the event. The inaugural ceremony was followed by an orientation programme, in which the heads of all departments showcased their individual departments to the new students. Parents also participated in a separate session involving the challenges to guide the students to the path of excellence