Couldn't have made 'Raazi' without Alia: Meghna

Mumbai, (IANS): "Raazi" director Meghna Gulzar says actress Alia Bhatt was the only choice for her to play the protagonist in the movie, and without her perhaps she wouldn't have made the film. 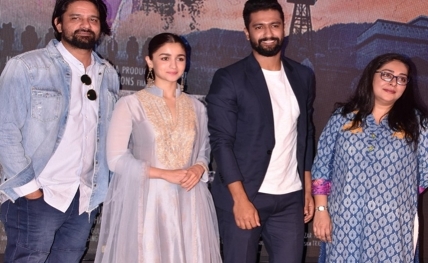 The film is based on Harinder Sikka's novel "Calling Sehmat" and is a cross-border spy drama.
Asked what made her cast Alia as Kashmiri girl Sehmat, Meghna told IANS: "From the time I learnt that I have to helm the film, Alia's face popped up in my mind and that never changed. I am really thankful to Alia for agreeing to do the film. Otherwise I couldn't have made the film.

"I don't think anybody else could fit in, with all due respect to the other actresses."

Meghna was clear from the start that she didn't want Alia's character to be like Lara Croft.

"Sehmat is an ordinary, simple 20-year-old girl with an innate strength which we all have in us, and we do things if circumstance demands... that we possibly won't do otherwise. So, the character needed to remain vulnerable, feminine and fragile; no matter what else was going on around her," she added.

Vicky is all praise for Alia.

"I think she is one of the versatile, spontaneous and organic actresses we have in the country. Look at the kind of roles she has taken up. She really feels what she performs and that translates on-screen," the "Masaan" actor told IANS.

He added: "As a human being, she is so easy going, she is a very genuine person, and we bonded really well during the shoot. She is always her real self."

In the movie, Vicky plays a Pakistani Army officer.