The 2016 sleeper hit "Happy Bhag Jayegi" was about Happy (Diana Penty) who runs away from home to be with her musician boyfriend Guddu (Ali Fazal) and accidentally reaches Pakistan. 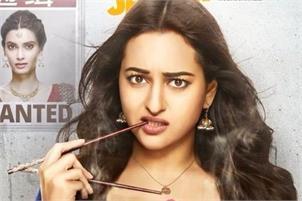 The second part, titled "Happy Phir Bhag Jayegi", revolves around Happy (Sonakshi Sinha) who is kidnapped and lands in China along with Jimmy Shergill, who is also kidnapped by the same gang.

When asked why he thought of China, Rai, who has backed the film as a producer, said, "Our attempt is that wherever we see little bit of conflict, we want to create happiness there. At the end of the day, we are making films and beyond that we can't do anything. (So) we try and tell something through this medium.

"Be it Pakistan or China, we can't solve anything through our medium, but we talk about happiness and provide entertainment."

Director Mudassar Aziz said he was under a lot of pressure while making the sequel of the hit film.

"I had to make sure we retain the innocence. Both these stories are my babies, both are different but they represent the same emotion. Happiness is one emotion which if we don't cherish or don't look after it or protect, it will run away; the title stands for that. Both these girls (Diana Penty and Sonakshi Sinha) are remarkable representation of happiness," he said at the film's trailer launch today.

"I had not thought of making the sequel. It is difficult to say what we have in mind right now (about the third part)," Mudassar added.

When probed if the sequel was made only after the film was a hit, he said, "It comes from the personal space of a filmmaker... I would be the last person to say why others are making sequels. If there is a story that you think should be told, then only a sequel should be made."

The film also marks the debut of Punjabi singer-actor Jassi Gill in Bollywood.

"It was my first film so I was bit nervous as I had to work with superstars. But I did not feel like I am from Punjab. They all made me comfortable," Jassi said.

Sonakshi and Diana both said they had a lot of fun being a part of the movie.

The movie is slated to release on August 24.

Rai, meanwhile, is looking forward to the release of his own directorial venture, "Zero", which has Shah Rukh Khan in the central role.

The director has shot a special song with Shah Rukh and Salman Khan, which he said was easy enough despite the superstar status of the two actors.

"I have been very fortunate. The two are so big but they never made me feel like they are superstars and it is their greatness (badapan)," Rai said.