Mumbai,(PTI) Actor Harshvardhan Kapoor says he is happy for sister Sonam Kapoor, who is set to tie the knot with beau Anand Ahuja.

Sonam, 32, has been in a relationship with Anand for a few years and their families released an official statement announcing the wedding date as May 8. 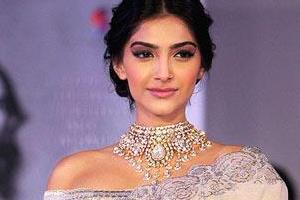 The preparations are on in full swing at the Kapoor bungalow in suburban Juhu.

"I am really happy she is getting married. Anand is a great guy," Harshvardhan told reporters here at a promotional event of his upcoming film "Bhavesh Joshi".

The actor said he would be taking a break from the film promotions to take part in his sister's wedding.

"The wedding is on 7th and 8th. After that, I will get into film promotions... So there is enough time for both," he said.

"Bhavesh Joshi" is slated to be released on May 25.

Asked what he would gift Sonam, Harshvardhan quipped, "A hug. I am broke... The movies I do they don't pay well. I will give her lots of love.