I never get trapped by people's perceptions: Arjun

Mumbai, (IANS): Bollywood actor Arjun Kapoor, who has done films like "Gunday", "Aurangzeb" and "Tevar" doesn't like to be characterised as an action or a romantic hero, and says that he will "never get trapped by thinking about the perception" of other people. 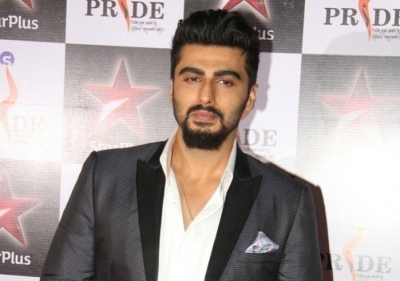 "I think the audience likes to see films. They are not there to only see me being an action or a romantic hero. People believe in good work. So I will never ever get trapped by thinking about the perception. I will always go after the material, like I am doing with R.Balki's new film," Arjun told Bollywood Country.

Having stepped into characters with rugged looks and oodles of action in movies like "Ishaqzaade" and "Gunday", Arjun begs to differ when asked if he intends to do more romantic films, especially after the success of his "2 States".

"See, Balki's film is romantic, 'Ishaqzaade' is also an out-and-out romantic film. I've not done any action in it...i'ts set in a world that has a lot of violence and this perception is created by the media.

"We as actors never think about the perceptions that are being created or what people think," he added.

The 30-year-old actor, who was rumoured to be stepping into actor Shahid Kapoor's shoes for the film "Farzi", says that at the moment he is doing only Balki's film, which is as yet untitled.

Arjun will start shooting for Balki's project around July end, and says he is "very excited" to work with the "Paa" filmmaker and actress Kareena Kapoor Khan.

"I am pretty excited to work with two of the most talented people in our country Balki and Kareena," the "Finding Fanny" actor said, adding that it is a romantic film. But he didn't divulge any further details about the project.

On being prodded about his role in the movie, he said: "That I don't want to speak about... that should stem from the director and very soon we will give you enough material about the film.

"When the time is right we'll make sure everyone gets to know...It's something I'm very excited about because I think today's generation will really relate to the film... it deals with our generation and issues of this generation."