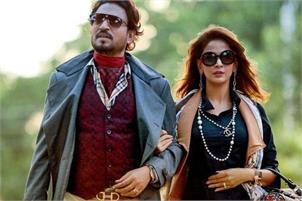 The second award for "Bareilly ki Barfi" came for Rajkummar Rao in the best supporting actor category. Held last evening here, the prestigious award ceremony gave away the best actor (female) award to Vidya Balan for her heartwarming performance of a housewife-turned-radio jockey in "Tumhari Sulu".

It was not only Irrfan but even "Hindi Medium" won in highest category - taking home the best film award. The dramedy, which marked the debut of director Saket Choudhary, was hit with the masses and the critics, and became one of the first successes of Bollywood in 2017, which until then suffered a dry spell at the box office.

Much like the last year, the award ceremony also more or less belonged to Rajkummar. He won the best actor (critics) award for his hard-hitting performance in survival drama "Trapped". The film also won in technical categories - best editing and best sound design.

His "Newton", which was selected as India's official entry for the upcoming Oscars in the best foreign film category, also received two honours - best film (critics) and best original story for its writer-director Amit V Masurkar.

Actor-filmmaker Konkona Sensharma bagged the best debut director for "A Death in the Gunj". The suspense drama also won in the best costume and best cinematography categories.

"Jagga Jasoos" might have been a box office dud but the film won big for its music. Pritam took home the best music album award, while Amitabh Bhattacharya received the honour for best lyrics. Pritam also bagged the award for the film's background score.

"Jagga Jasoos" also won in the category of best choreography for Vijay Ganguly and Ruel Dausan Varindani for the song "Galti se mistake".