Bengaluru, 20 February 2020: Prabhas, yet again, makes his mark in Bollywood by winning his first ETC Bollywood Business Award for Highest Grossing Male Debut in Saaho. His ‘darlings’ have taken to social media to shower their love for his win!

In Saaho, Prabhas played a rebel with a cause opposite Shraddha Kapoor and their on-screen chemistry sizzled. Not only in India, but the Saaho fever resonated well in the US, Australia, New Zealand, Japan and other international markets. The magnus opus took fans for a thrill ride with it’s amazing storyline, high budget sets and fresh, edgy & larger than life action sequences. 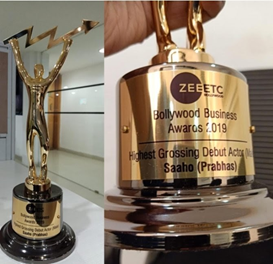 His upcoming project, whose tentative title is ‘O Dear’ is already on its 3rd schedule. This is also going to be a Pan India release where he would be starring opposite Pooja Hedge. Being directed by Radha Krishna Kumar, this romantic period love story set in the 1920s in Paris, will see Prabhas playing the role of a fortune teller & Pooja, a violin teacher.

Prabhas has previously won the Best Actor Male for Mirchi in 2013 and Baahubali 2 in 2017.

With the massive International success garnered by the Baahubali franchise, Prabhas shot up from being a successful South Star to India’s heartthrob. His upcoming projects show great promise and the fans are already excited about more awards flowing in.