Reasons for backlash against Swara are warped: Tillotama Shom

Mumbai, (PTI) Actor Tillotama Shome says people may not agree with Swara Bhasker's opinion on "Padmaavat" but their reasons for attacking the actor are "lame" and "warped". 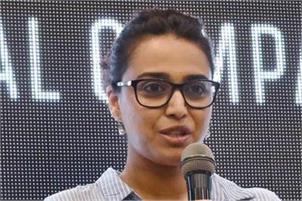 The actor said like any individual Swara has the right to express herself.

"Swara has the right to express herself in what she felt in watching a film. It could be this film or any other one for that matter. It could be another woman or even a man who felt that the representation of a certain character was reductive," Tillotama told PTI on the sidelines of the day two of the ongoing Lakme Fashion Week Summer/Resort.

Swara had criticised director Sanjay Leela Bhansali for the "glorifying" the now-banned archaic jauhar practice in an open letter, for which she is receiving a lot of flak on the social media.

In her letter, Swara had said that she "felt being reduced to a vagina - only" after watching the period drama.

Shome said it was unfortunate that feminism has got "such a bad reputation".

"I would really like to be in a place that celebrates masculinity, femininity and androgeny with grace. We need to expand our boundaries where we are not talking about what is it to be a man or a woman.

"We need to have a sense of inclusion and an expansive sense of self that is not so gendered," she said.

Shome walked the ramp as a showstopper for Kolkata-based Shantanu of label Maku.

She delivered a powerful monologue about how people let life pass by in the hurry of running ahead - to present the 'In Transit' collection made from Khadi Jamdani with indigo dyes.

The LFW runs through February 4.