This is not my India: A R Rahman on Gauri Lankesh's murder

Mumbai, (PTI) Music maestro A R Rahman has condemned the killing of senior journalist-activist Gauri Lankesh, saying the current scenario does not represent the India he knows. 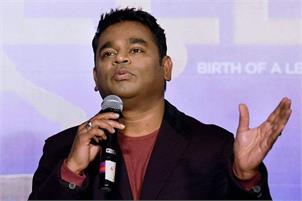 The Kannada journalist, known for her left-leaning outlook and forthright views on Hindutva politics, was shot dead by unidentified assailants at her residence on September 5.

The 50-year-old music composer expressed sadness over the incident.

"I am so sad about this. These kind of things don't happen in India. This is not my India. I want India to be progressive and kind," Rahman told reporters.

The Oscar winning-musician was speaking at the premiere of his upcoming film "One Heart: The A R Rahman Concert Film".

The movie is based on Rahman's concert tour across 14 North American cities, which includes footage of the composer and his band members during the gigs and rehearsals.

Talking about his movie, Rahman said, "'One Heart...' is probably the first concert film in India. We wanted to give you an alternate kind of film, because we have seen an action, comedy and romantic film.

"This is a musical with great quality sound. The profit from the film will go to One Heart foundation."

When asked if the audience will see a biopic being made on his life, the music composer said, "I am still young. I don't need a biopic. May be someone will make after I am gone.