rs deserve to be paid more than film stars: Akshay

Mumbai, (PTI) From judging reality shows to promoting his films on daily soaps, actor Akshay Kumar has been frequent on the small screen and believes TV actors work harder than film stars and deserve a better pay package. 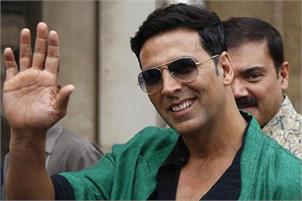 The 50-year-old star says television artistes have to continuously be on their toes and deliver their best in a short span of time.

"I admire television artistes more than people from my industry as their job is hard. We (film actors) don't do one fourth of the hard work that television actors do. I respect them a lot. They work much harder and I feel they should be paid more (than the film stars). If not more, they should get at least what we are paid.

"They have to read 12-15 pages of script, which is given to them minutes back from the writer. But what will a writer do in this as he has orders from (his bosses) and change things. Everything happens so fast, they (writers) think on the spot and change things," Akshay says in an interview here.

The "Toilet: Ek Prem Katha" star says he closely saw how TV actors work hard endlessly, while he went on film promotions on the small screen.

"Television is not easy as you work continuously. There are several cameras monitoring you. I have learnt to admire people who work on television shows, be it the artiste or other team members. We film actors don't value things," he says.

Without naming any show, Akshay reveals his mother is an ardent fan of some television serials.

After "Khatron Ke Khiladi", "Master Chef" and "Dare to Dance", the National Award-winning actor now returns to television with "Great Indian Laughter Challenge" as a judge.

The show is making a comeback after nine years with its fifth season, with popular comedians such as Zakir Khan, Mallika Dua and Hussain Dalal as mentors.

Akshay says he used to follow the show earlier as he is a huge fan of the comedy genre.

The show goes on air on Star Plus from September 30.