The programme commenced with a solemn Holy Mass celebrated by His Grace Most Rev. Bernard Moras – Archbishop of Bengaluru along with many other priests, belonging to various congregations, as co-celebrants.

A book containing a collection of prayers and vespers comiled and published by Rev. Fr. Praveen Pinto was released by the Archbishop, soon after the mass and a copy of the same was handed over to FKCA Chairman Arun Fernandes.

The official stage programme began with an invocation dance by the member children.

The stage event was was presided over by Archbishop of Bengaluru - His Grace Most Rev. Bernard Moras. Mr.Roy Castelino, president of the Karnataka Konkani Sahithya Academy graced the occasion. They lit the lamp along with other dignitaries, before occupying their seats on the dais. FKCA chairman Arun Fernandes welcomed the presiding officers, distinguished guest, awardees of the year, past chairman Victor Edward D’Souza and other dignitaries on the dais, along with the member association presidents, executive committee members, office bearers and the august gathering and also delivered his chairman’s address.

FKCA which is an apex body representing about 33 Konkani Catholic associations locally and globally, honoured three Konkani Catholic achievers for being role models to the Konkani community in their respective domains. This is the first time in the history of FKCA awards that a female has been selected for the award and that too two of them made it all the more delightful.

Konkan Myna Meena Rebimbus’ contribution to Konkani through her singing over 50 years was decorated with the Professional Excellence Award. She not only sang alongside her husband and Konkan Kogul Late Wilfy Rebimbus but was an inspiration and a pillar of strength that helped Wilfy-ab compose memorable Konkani songs for generations to hear.

A young entrepreneur, who started his website as a joke that turned out to be serious media business which gained popularity and presently has 450000 daily viewership across 180 countries due to the efforts of none other than its founder Walter Nadalike who was accorded as the FKCA Entrepreneur of The Year Award.
Each of the awardees was honored with a shawl, a plaque and a 'Maan Patr'. Their endeavors and achievements were read out for all to know, as they were bestowed with the awards.

Starting the awardees speeches, Walter Nandalike urged the Konkani people to get involved in start-ups and entrepreneurship. He paid rich tributes to Meena bai and Irene Pinto and mentioned that he grew up listening to their songs and reading their novels respectively. Meena Rebimbus in her own style chose to express her joy by singing a beautiful self composed ballad. Irene Castelino thanked FKCA for recognizing her works and honouring her.

A book containing Konkani Gadhi (proverbs), Mukvaram (Idioms), Utthram (phrases), Huminiyo (riddles) complied by Gladys Quadros was released during the program by Roy Castelino – President of the Karnataka Konkani Sahithya Academy in the presence of her husband Stephen Quadros who briefed the gathering about the book and looked forward to encouragement and support from the Konkani community for their future publications.

In his address, Roy Castelino, stressed upon the need to promote Konkani language in our homes, schools and liturgy wherever possible. He lauded the efforts of FKCA in playing a pivotal role in fighting for the rights of the Konkani community in Bangalore. He also said he was happy to be a part of the book release and appreciated the works of Stephen Quadros. He urged the Konkani community to encourage and support Konkani writers who are making all efforts to keep Konkani alive. He also extended an invitation to all FKCA members to be a part of the Konknai Lokothsav to be held at Mangalore in mid February.

In his presidential address, Archbishop of Bengaluru, Most Rev. Bernard Moras called upon the Konkani community to join hands with all other languages in order to bring about brotherhood and peace in society. He appreciated the FKCA for making efforts in recognizing talent and awarding such eminent personalities and also lauded the three awardees of the year seated on the dais.

The presidents of all the affiliated associations, past chairmen and council members of FKCA were felicitated at the program.

Anup Saldanha, General secretary of FKCA, proposed the vote of thanks to all the dignitaries, donors, support teams and member associations of FKCA for making the day memorable.

After the dignitaries' exit from the stage, the gathering was entertained by cultural dance programmes, band and skits enacted by the member associations. The programme was compered by Pramila while DJ Godwin added spark to the event with his fusions and bailas.

FKCA extended a hearty thanks to the sponsors of the event – Main sponsor of the event was Mr. Ronal Colaco (NRI) and family while Ace Designers co sponsored the program. Deccan Group, Park Plaza Hotels and Carmel School & PU College along with many other donors and well wishers extended their support to the event. FKCA also thanked all its affiliated member associations who shared the responsibilities to make the Federation Day programme a huge success.

The presence of a large Konkani Catholic community of Bengaluru added to the extravaganza of the Federation Day. Dinner for all present at the venue was provided by FKCA. 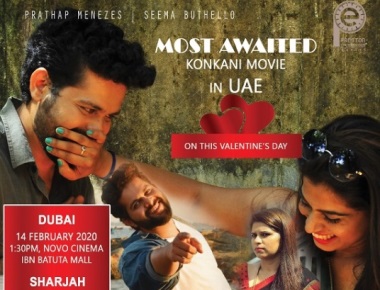