Kuwait: Konkani Community Kuwait (KCK) is a group formed to unite all the Catholic Konkani people of four parishes in Kuwait. To strengthen the bond of unity KCK is organizing a mega event Konkani Musical Show - ‘WilfyNite’, on April 15, 2016 at American International School, Maidan Hawally, Kuwait. This will be a tribute to "Konkan Kogul" Late Wilfy Rebimbus who has composed over 3000 songs and has over 250 Musical Shows to his credit all over India, Middle East and Canada. It is well said, ’The King of Konkani music, Konkan Kogul Wilfy Rebimbus was not just an extraordinary musician but was a Konkani institution himself.’ It was he who gave new dimension to Konkani music and put Konkani Music on a higher pedestal. Without any doubt eternally resting with the Lord he is singing with heavenly Choir and his music still flows in our mind and heart.

A six members troupe will be flown in from Mangalore including – Konkan Myna Meena Rebimbus, Veena Rebimbus, Vishwas Rebimbus, Babita Pinto, Joswin Pinto and Lesli Rego by whom the whole show will be Compered by the Compere beyond Compare. They will be accompanied by renowned local singer - a singer loved and admired by all - the Golden Voice of Mangalore Rony D’ Cunha and along with him the winners of Gulf Voice of Mangalore. The music will be accompanied by multi instrumentalist musician Adrian Gomes. 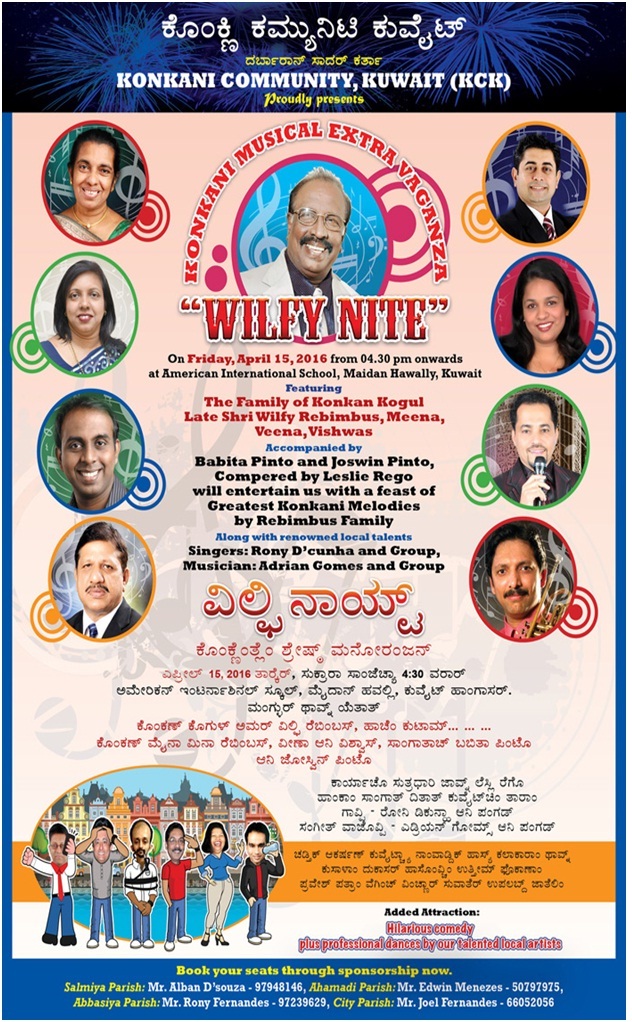 The show will be entertained with hilarious comedy by local artists and variety of dances by talented dance groups.

The evening is sure to take the music lovers down the memory lane.. Promising entertainment for Wilfy’s fans, who have been eagerly awaiting to listen to his meaningful songs.

This event is particularly organized not only to entertain and rejuvenate the minds of our Konkani Community residing here in Kuwait but also to promote and support Konkani Music, Culture and Language, bearing in mind the fast changes in life style and mode of communication all over the world effecting our beloved Konkani language and culture to its root.

The energy and enthusiasm with which the KCK members have been working selflessly, and the great response pouring in from all 4 corners of Kuwait, is definitely bound and expected to make this event a great success adding one more feather on KCK’s cap.