Kuwait,: Kuwait Canara Welfare Association (KCWA), in its 30th year of inception, is all set to host the grand finale of sixth edition of Gulf Voice of Mangalore (GVOM). After completing five successful seasons in Kuwait, Dubai, Qatar, Muscat and Bahrain, grand finale of season 6 will be held in the State of Kuwait, the birthplace of GVOM. 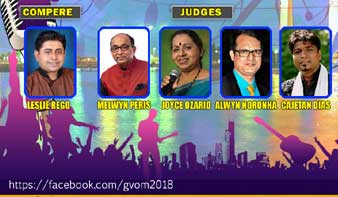 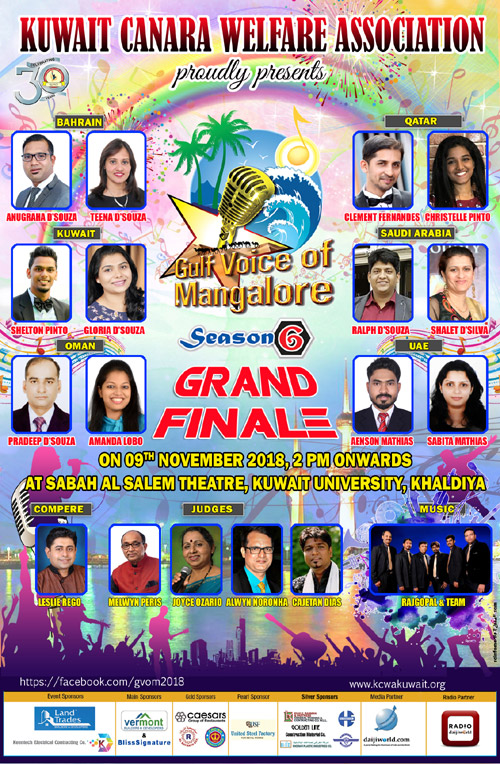 KCWA will also celebrate its 30th anniversary during this event. The grand finale will be held in Kuwait on November 9 at the Sabah Al Salem Theatre from 2 pm onwards.

Gulf Voice of Mangalore, a Konkani singing talent hunt show popular among Konkani music loving and Konkani speaking people residing in the Gulf countries, founded by late Louis Rodrigues and Lawrence Pinto in 2008, has come a long way by giving opportunities to many Mangalurean talents across the Middle East.

Preliminary and semi-final rounds were held successfully in all the six Gulf countries by Konkani organizations of the respective countries. Twelve finalists, six male and six female, who have been chosen after tough semi-final contests in their respective countries are now preparing to contest in the grand finale for the coveted crown of Gulf Voice of Mangalore – Season 6.

The core committee of GVOM-6 grand finale headed by Steevan Misquith has announced the panel of judges, compere and the musicians.
The panel of judges include well-known singers, composers, musicians from Mangaluru and Bengaluru. Melwyn Peris, Joyce Ozario, Alwyn Noronha and Cajetan Dias will judge the grand finale to crown the Gulf Voice of Mangalore 2018 in both male and female category. Ace compere Leslie Rego who was instrumental in the success of past five seasons of GVOM is all set to host the grand finale of GVOM-6.

Music for the grand finale will be provided by some of the finest musicians from India led by Rajgopal K. The same troupe had created sensation among the audience during grand finale of GVOM-Season 5 in Bahrain.

KCWA president Hilary Stevan Rego and event manager Naveen Mascarenhas along with KCWA management committee members has invited all the supporters of GVOM for the grand finale and requested everyone to reserve their seats at the earliest to be a part of the grand musical celebration.