'Jezu Maka Apoita' prayer group from the Holy Spirit Church of Ghala, Sultanate of Oman is a group of Konkani speaking Catholics who get together in prayer.They celebrated their 14th anniversary on the 23 thof August ,2016.

The day's events started with the Eucharistic celebration in Holy Spirit Church, Ghala. The high mass in Konkani was celebrated by Fr. Marian Miranda, Assistant Parish Priest , Sts Peter and Paul Catholic Church ,Ruwi. The melodious choir led by Charlotte and team consisting of Hubert, Praveen Niddodi,Peter,Meera,Cynthi Saldanha made the celebration even more meaningful and beautiful.

After the Holy Mass the get together was organized by the Core Committee of the prayer group consisting of Hubert Dsouza, the President of the Committee , Lancy Barboza ,Praveen Niddodi ,Peter Fernandes, Thomas Dias ,Leo Saldanha ,Cynthia Saldanha ,Synthia Dsouza and Aslita Dsouza.

The celebration began with a prayer Song by the Core Committee. Hubert Dsouza the President of the prayer group welcomed the gathering and expressed his gratitude to all the members and the supporters of the prayer group. On this occasion, the Committee members celebrated the 14th Anniversary with the cutting of the cake.

Lancy Barboza presented the report for the current year.

The tiny tots of the community presented a dance –Meurel ,Mcneil Nathan and Solo dances were presented by Anisha D’costa and Jasline

The main highlight of the day was an act message of helpfulness and timely prayers was performed by Committee Members, which gave a religious message to the audience .It was written and directed by Peter Prakash Fernandes. The back stage commentary was done by Meera.

Cynthia Saldanha then gave a vote of thanks .It was followed by a game of Thumbola. Charlotte , the compere of the event and an active member of the prayer group conducted the whole event very meticulously and kept the audience glued to their seats with his various quizzes and spot prizes.

Mangalorean Tradition lunch was served by the members, it marked the end of the day’s celebration. 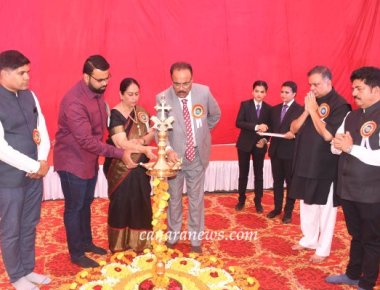