Karnataka Sangha Sharjah will be celebrating their 17th anniversary along with 64th Karnataka Rajyotsava Day and Children’s Day celebration on Friday the 15th of November, 2019 from 4 pm at Sharjah Indian Association Auditorium, Sharjah. 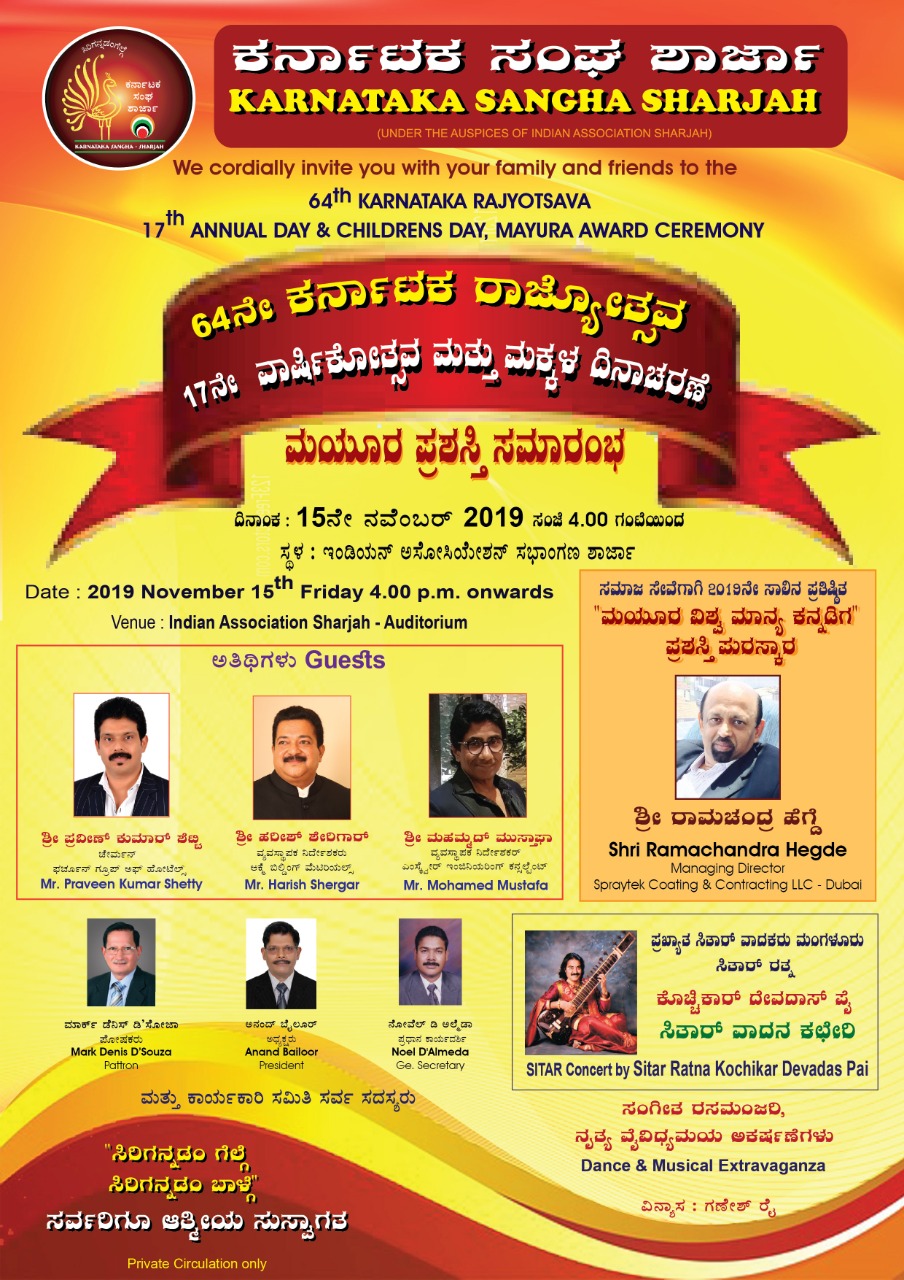 Vidwan Sitar Ratna Kochikar Devdas Pai is the star of attraction who will be performing during the Sharjah Karnataka Sangha Anniversary programme. He will be arriving all the way from Mangalore and this will be his maiden performance in Dubai.

Devdas Pai has performed all over the world and has acclaimed appreciations and awards wherever he performed. He is a very rare gem born to Kochikar Gopalkrishna Pai & Radha Pai on 15th February, 1962. A graduate of Arts he is the Managing Partner of the famous New Chitra Talkies Mangalore.

Pai learnt Sitar initially in Bharatiya Vidhya Bhavan later got trained with Ustad Khan and further got his additional training under the guidance of Padmashree Dr. Kadri Gopalnath through whom he learnt to play Carnatic in Sitar.

Dharmadhikari Dr. Veerendra Heggade of Dharmastala honored Devdas Pai with VIDWAN Award in the year 1995 and later continuously received lot of appreciation for his dedication and performances.

Some of his Awards are:-

Being the recipient of so many awards and accolades Sitar Ratna Vidwan Devdas Pai now dedicates his knowledge to the current youth by teaching them Sitar and training the new generation towards the wealth of music knowledge.

As was done in the past, Sharjah Karnataka Sangha on this occasion will be doing the honours of presenting ‘Mayura Vishwmanya Kannadiga Award – 2019’ to the identified Kannadiga who have contributed towards Kannada in this part of the world. And this time, Amchigele Ramachandra Hegde, Managing Director of Spraytek Coating / Contracting LLC has been chosen as awardee for the year 2019 who will be honoured in midst of various Guests who will be gracing the grand occasion.

President Anand Bailoor along with Patron Mark Denis D’souza, General Secretary Noel D Almeida and all the Committee Members have requested Kannadigas from all over UAE to come in large numbers and be part of the celebrations.

Entry is Free to all Kannadigas.