Mangaluru (The Hindu): Scuffles, heated exchanges erupt between citizens and bank staff as most ATMs stay offline, branches run out of cash. ATMs yet to be recalibrated for new notes, say bankers

Anger and frustration spilled out onto the streets in several parts of the city on Friday as cash-strapped Mumbaikars discovered that ATMs, which were to begin dispensing new currency notes in the morning, were still offline and the banks struggled to cope with the demand for cash, including new notes.

Long queues were seen outside ATMs as people waited for several hours to withdraw money for daily expenses. Bank branches and post offices were crowded for the second day as citizens desperately tried to exchange demonetised currency. Bank staff continued to be under pressure as they worked overtime to meet the demand. Servers broke down, and patience wore thin, at most branches where the average waiting time to get the limited quota of valid notes was close to three hours. 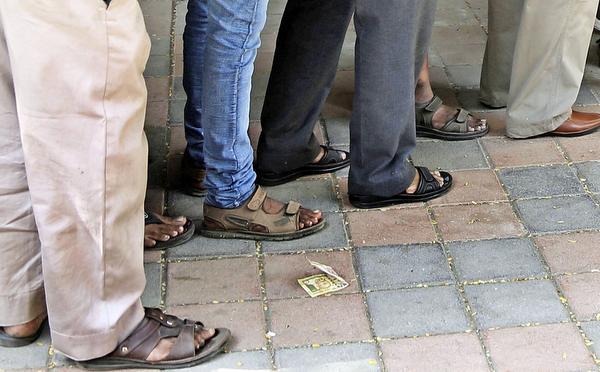 The ATMs, which were to be operational from Thursday midnight and dispense currency in denominations of Rs. 50 and Rs. 100, experienced shortage of cash and remained shut at most places. Since the recalibration for higher denomination of valid notes is still being done for ATMs, the stock of Rs. 100 notes finished rapidly due to the huge demand, said a banker. Many ATMs are still waiting for recalibration, the banker said, adding that the rush is expected to grow further over the weekend.

The country’s largest lender, SBI, was able to press into service only about half of its ATM network nationwide. “We have also been able to put up 29,000 ATMs and cash deposit machines (CDM) today. Of these, 21,000 ATMs were functional and the rest are CDMs,” SBI Chairman Arundhati Bhattacharya said. As per the government notification, ATMs would dispense a maximum of Rs. 2,000 per card daily.

Chhaya Mhatre, 52, who works as a domestic help in Pedder Road, failed to get cash after waiting for two-and-a-half hours in the queue at a Bank of Baroda branch. “I received my salary two days ago, but I don’t have money for a cup of tea at the moment. I had to bunk work today, and here I am, waiting to exchange notes.”

At IndusInd Bank in Thane’s Vasant Vihar, Meera Karthik, a 35-year-old homemaker, said, “I have been waiting for two hours to exchange money, but the queue doesn’t seem to be moving at all.” Homemaker Sujata Pujari, 40, from Gandhinagar, said although she had till December 30 to exchange redundant currency, her family was running out of cash. “We need to keep some cash at home for contingencies like tuition fees, daily expenses,” she said.

After having waited for almost two hours at HDFC Bank’s Hughes Road branch, businessman Aashish Shah and his wife Dakshini Shah, a physiotherapist, said, “Our minds are so blocked ever since the demonetisation was announced. We don’t even know how this is going to turn out. We will come to know how effective this really is only after two months, and whether the decision is making any difference in taking the country forward.”

A teacher living in the same locality did not mince her words. “This is more like a ‘torture the common man’ tactic. Instead of going to work, we’re waiting here in queues wasting our time. And this entire struggle is for withdrawing our own hard-earned money. By calling it a surgical strike, they can’t make the common people feel better about the trouble they are putting us in. This is clearly a nuisance,” she said.

As the afternoon wore on, irritation and anger was palpable from bank to bank. Rakesh Haldankar, who works at the Western Railway headquarters, said, “I waited for four hours at a State Bank of India branch, but nothing happened. I’m so frustrated now. The government should have given some time to the people. I do believe that demonetisation will bring out a lot of stashed money, but in the process, we poor people are struggling for our survival.” Mr. Haldankar said he spent another one-and-a-half hours at the Bank of Baroda in Churchgate.

However, several who waited patiently for hours were supportive of the demonetisation move. “Even I have been waiting for two hours now, but I don’t understand why everybody is complaining so much. It is indeed very inconvenient as the business is going down, but I’m sure if Modiji has taken this step, he has thought about a better future for the country. After a while, it will all be fine. People will also slowly realise this, I think,” a shopowner at Babulnath Temple, Kemp’s Corner, said.