Mumbai (The Hindu): A forum demanding entry of women into Mumbai’s Haji Ali Dargah will be holding a protest on April 28 outside the shrine to ask the trustees to withdraw the restriction imposed since 2011. 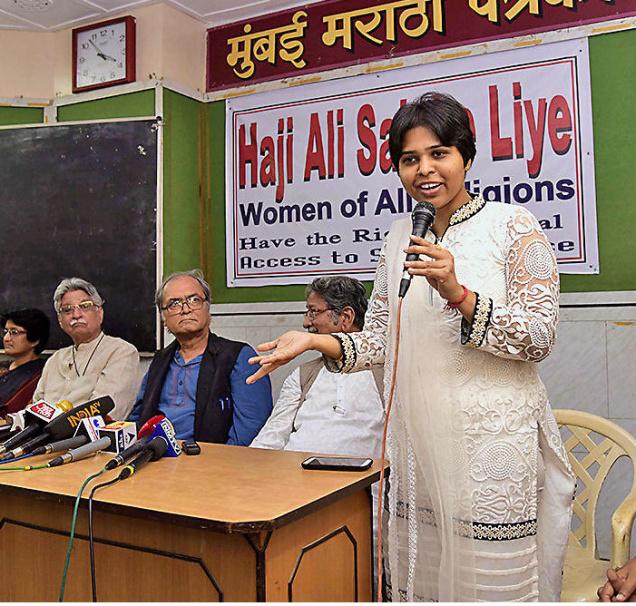 Over 50 activists, writers and scholars from Hindu and Muslim communities have joined hands demanding a right to pray, and anouncing a new forum, Haji Ali for All.

Trupti Desai, an activist who shot into the public eyer following her successful agitations demanding women’s entry into the Shani Shingnapur temple, has vowed to support the struggle and participate in the agitation.

“We are fighting for our right to enter temples, mosques and dargahs despite the Constitution giving equal status to all citizens of the country,” said Ms Desai. “Whether one wants to enter or not is a different matter, but there should be no restrictions on entry in a secular and democratic country.” Ms Desai said a battle for this right should be waged on the streets and in the court. “The temple issue was raised on both podiums, which resulted in our victory. I am sure that the trustees of the dargah will listen to us and better sense will prevail.”

“The forum is of the firm view that women’s entry into a dargah is not a religious issue, but something to do with customs and traditions,” said Javed Anand, of Muslims for Secular Democracy, at a press conference on Wednesday. “In fact, until 2011, the dargah did not put any restrictions on women. We are aware that a petition seeking women’s entry is pending in the Bombay High Court, but it would be appreciated if trustees proactively lifted the restriction.” The forum members will also be seeking a meeting with the trustees. Mr Anand pointed out that some of the dargah’s trustees are also trustees of the Makhdoom Baba dargah at Mahim, where there are no restrictions on women. “The forum endorses the supremacy of our constitutional principles over customs or traditions which undermine gender justice and equality.”

Film director and writer Saeed Mirza said the issue is to follow the Constitution. “Once we decide to implement it, there should be no restrictions of such kind.”

Mariam Dhawle of All India Democratic Women Association said that the issue of gender equality is being purposely twisted in a communal manner. “Unbelievable reasons such as safety of women are being given while denying permission to enter the dargah,” she said, adding that an effective way of handling women’s safety would be to arrest men who jeopardise women’s safety, and not bar women from entering a place.

A person called Javed Lodhiya and his accomplice created a flutter when they started making a speech in support of the ban citing Sharia law.