All six elected MLCs are crorepatis 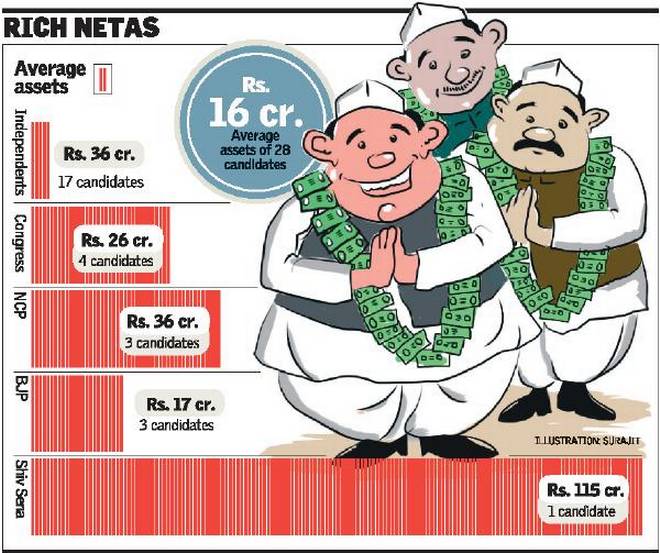 A study of affidavits, filed by all the candidates who contested the six seats for the biennial elections, by the Association for Democratic Reforms (ADR) and Maharashtra Election Watch (MEW) show that 20 of 28 candidates (71%) are crorepatis. All the candidates from the Congress, Bharatiya Janata Party (BJP), Shiv Sena, and the Nationalist Congress Party (NCP) are crorepatis. The average assets per candidate analysed is Rs. 16 crore.

Among the elected MLCs, Mr. Sawant from Yavatmal tops the chart with Rs. 115.45 crore and has four cars in his name. NCP’s Anil Bhosle, who won from Pune, ranks second with property worth Rs. 74.36 crore and also has four cars in his name. Mr. Bhosle tops the chart with highest liability, which amounts to around Rs. 7 crore, followed by BJP’s Chandu Patel with around Rs. 6 crore.

As per the report from ADR and MEW, seven of 28 candidates had declared criminal cases against themselves, of which four had serious cases like culpable homicide not amounting to murder, attempt to murder, bribery, dacoity and robbery.

Mr. Sawant has a case of not accounting provident fund contribution and administrative charges of employees of Bhairavnath Sugar Works. Congress’ Mohan Kadam and Amara Rajurkar along with BJP’s Chandu Patel have no cases against them. Another BJP MLC Parinay Fuke has a cheating case against him, along with six other cases.