Another BJP minister lands in trouble 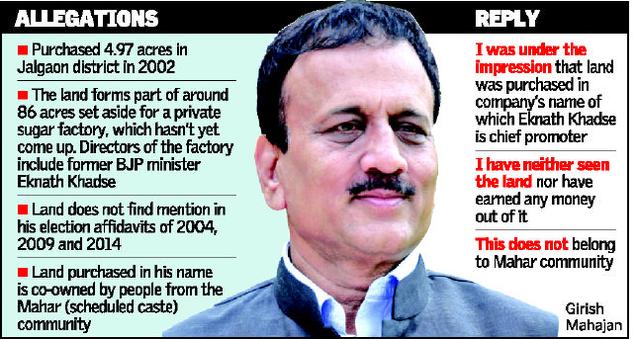 Mr. Mahajan, it is alleged, purchased 4.97 acres in Mangaon village in Jalgaon in 2002, as part of a land parcel that was to be used to set up a private sugar factory promoted by Mr. Khadse-led Tapi Purna Sugar Factory Ltd. While the factory was never built, Mr. Mahajan failed to mention the land purchased by him in the election affidavits filed by him in three consecutive Assembly elections, 2004, 2009 and 2014.

The Nationalist Congress Party (NCP) on Thursday demanded Mr. Mahajan’s ouster from the State Cabinet, as it had with Mr. Khadse.

In his application to the EC, Mr. Patil has claimed that hiding information in election affidavits falls under the definition of ‘corrupt practices’ as per sections of the Representation of the People Act, 1951. “Not only his election should be cancelled, but criminal process should be initiated against him.”

Congress spokesperson Sachin Sawant alleged that the land purchased by Mr. Mahajan belonged to the Mahar (scheduled caste) community and it was illegal for the minister to purchase it.

Mr. Mahajan however, has denied of any wrongdoing, claiming that he was not aware that the property was in his name.

According to Mr. Mahajan, the property was purchased in the name of the company which was to set up the sugar factory. He also denied that the land belonged to the Mahar community. The minister claimed that he has neither seen the land nor earned any money out of it.

The NCP, however, contested the minister’s claim. Nawab Malik, chief spokesperson, NCP, said, “If his claim is true then he must explain as to who built the compound wall around the plot? How did a government road come up? Who is planting horticulture?”