Mumbai (The Hindu): In keeping with its plan to hold Maharashtra Day celebrations across the city, the Bharatiya Janata Party (BJP) on Monday made its intention to poach Marathi votes from the Shiv Sena clear. Not only did the party organise a function in each of the 227 wards, it also held a grand function at Bandra Reclamation attended by Chief Minister Devendra Fadnavis. 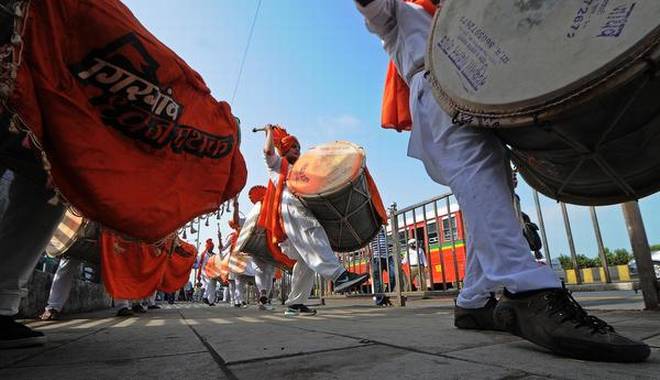 In the recently-held BMC polls, the BJP won 82 seats, which was only only two short of the Sena’s 84. The post-poll analysis showed the party had done exceedingly well in non-Marathi areas by nearly sweeping those areas but fell short in Marathi-dominated areas like Parel, Lalbaug and Dadar. Always in election mode, the party is implementing its strategy to win Marathi votes the Sena gets, and has already weakened the hold of the Maharashtra Navnirman Sena (MNS).

While the rest of the parties were content with offering floral tributes at Hutatma Chowk, erected in the memory of those who lost their lives in the struggle for a united Maharashtra, the BJP chose organise 257 programs in 227 wards. More than one event was held in Marathi-dominated wards in Worli, Parel and Lalbaug. Over 100 squares in the city were selected and decorated with party flags. The events also included educating citizens about the Bhim app launched by the Central government, Dhol competitions, prayer programmes, book distributions for students and felicitation of sanitation workers.

“It is not about Marathi voters, but the celebration of Maharashtra, and we as citizens of this State are celebrating it with fervour. There is no need to see it through a political prism,” Ashish Shelar, the BJP’s Mumbai unit chief, said.