BJP sails through winter session, thanks to a divided Opposition

Mumbai (The Hindu):There were only two occasions where all MLAs and MLCs fought together.The two weeks of the winter session of the legislature saw the Opposition raise a number of issues — Maratha reservation, demonetisation and falling onion prices — to corner the government. Even the ruling alliance partner, Shiv Sena, added fuel by introducing a calling attention on the drinking water crisis in rural areas. But despite all this, the government had a smooth sailing, thanks to a divided Opposition. 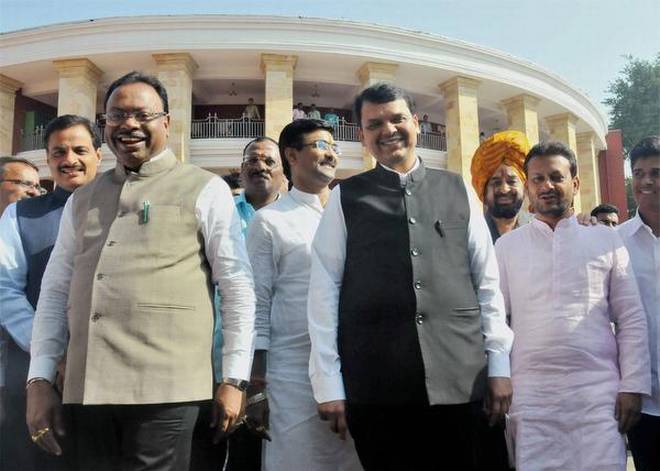 “We have too many senior leaders who do not coordinate the in-house strategy by keeping their ego aside. The NCP has its own agenda. Since the State Council polls, where we contested separately, they have been maintaining a distance from us, and all this contributed to our poor performance in the legislature,” a young Congress MLA told The Hindu.

In the first week, MLAs from Satara district highlighted non-availability of funds for the drinking water scheme for the last two years. In its reply, the government said the money has been released and work is in progress.

Leader of Opposition in the Council Dhananjay Munde said despite a sharp fall in onion prices and assurances from the State of seeking financial help from the Centre, the government had not approached it for six months: from May 2016 to November 2016.

After discussions on Maratha reservation and demonetisation, the Opposition had no ammunitions. Then the video tape of Cabinet Minister Mahadev Jankar threatening an Election Commission officer, and the alleged land scam around the proposed Mumbai Nagpur Supercommunication Expressway offered it a breather.

Throughout the session, there were only two occasions where all MLAs and MLCs fought together. The first incident was when the names of the CST, Elphinston Road were changed and the second when a breach of privilege motion was passed against the government officers for not ‘respecting’ the elected representatives.

Interestingly, both the Houses took note of a scathing editorial from a Marathi daily, which criticised the MLAs and MLCs, with Council Chairman Ramraje Naik-Nimbalkar mulling action.

With his main rival Eknath Khadse out of the Cabinet, Chief Minister Devendra Fadnavis seemed to have overshadowed almost every other BJP Minister. NCP leader Jayant Patil even said Mumbai is functioning the way Delhi is.

A senior bureaucrat said the Opposition has failed to find anything against the man. “By giving a clean chit to his Cabinet colleagues, he is becoming their messiah. He has got a free hand from the PM; so he cannot even be touched.”

As happened in the municipal council polls, the corporation elections will be fought in the CM’s name. Now, all decisions of whether to ally with the Sena or not are with him.

The issue of separate statehood for Vidarbha always makes headlines in the winter session, but it was not so in 2016.

Leader of Opposition in the Assembly Radhakrishna Vikhe-Patil’s question on the government’s commitment of a separate Vidarbha went unanswered.

Mr. Vikhe-Patil had asked whether it was just an election promise which will not be fulfilled.

In his speech on the concluding day of the Legislature, the CM, instead, listed out the already-announced projects for Vidarbha. He even appealed to the Congress MLAs to keep party differences aside for the cause.