Mumbai,(The Hindu): Members of the Christian community staged a protest outside the K West ward office of the Brihanamumbai Municipal Corporation (BMC) in Andheri on Wednesday, against the alleged encroachment on St. Blaise Church cemetery. They demanded access to the burial ground that has been blocked from all sides by a timber merchant. 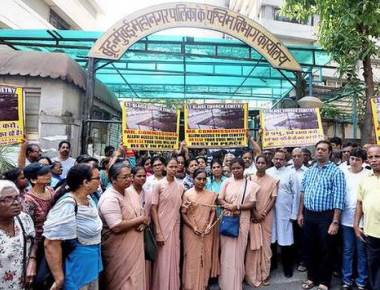 The property at Amboli Naka was utilised in the past for the burial of parishioners during the plague epidemic of 1904. It is sandwiched between the railway track on one side and S.V. Road. The church claims to have all the documents confirming that the plot belongs to it.

Father Adrian Ferreira, parish priest of St. Blaise Church, said the church has been paying taxes for the property to the BMC. “Till last year, we were allowed to pray at the burial ground but this year, the timber merchant denied entry. The present cemetery adjacent to St. Blaise Church is not sufficient so the parishioners have to use the cemetery at Oshiwara. That is why we need this property,” Father Ferreira said.

Nicholas Almeida, a trustee of Watchdog Foundation, who was part of the protest, said, “Our community has been growing over the years, but we have only Sewri and Oshiwara cemeteries apart from the small ones attached to the church. There are 10,000 parishioners under St. Blaise Church; where will they go? It is our right to pray for our loved ones.”

Mr. D’Souza said they have been requesting the corporation to look into the matter for the last one year. “We met the assistant municipal commissioner last July when he promised to do the needful. We also filed a grievance complaint in November last year. He promised in the presence of Mr. Achrekar there would be road cutting in October but nothing has happened,” he said.

The church claims there is an encroachment on their property up to five metres by the illegally constructed shops and sheds of the timber merchant, Haji Abdul Gani Ali Mohammed and Company.

The timber company however said they have official documents. “We have proper documents to prove our shops are not illegal. After all these years they claim it’s their property. For years the land had been full of garbage, but we cleaned it, and if we don’t clean it periodically there is a possibility of fire like the one broke out in the past,” an employee of a shop said. The owner could not be reached for comments.

On November 2, Christians observe All Souls Day when they pray for the deceased members. Members of St. Blaise Church now have planned to perform mass on S.V. Road outside the burial ground if no action is taken.

Mr. Gaikwad said, “The question of access is not an issue of the corporation, it is up to the landholder to arrange it. We have requested a report from the city survey office and if there is an encroachment on the road or on the property of the church, we will start demolition.”