Mumbai, (The Hindu): Citizens will have to brace for an unseasonal spell of rain from December 4 to December 6, as Cyclone Ockhi makes its way towards the Maharashtra and Gujarat coasts after damaging many parts of South India and the Lakshwadeep Islands. It has claimed 13 live so far. The IMD has sounded a high alert and advised fishermen to not venture out into the sea off south Gujarat 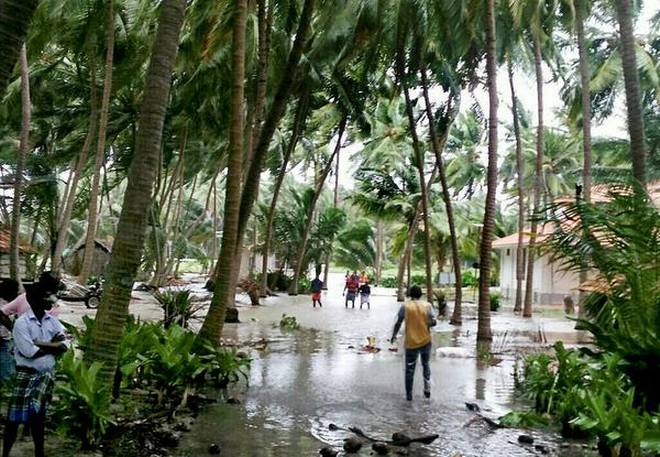 Mahesh Palawat, vice-president (Meteorology), Skymet Weather, said, “Light rains are expected from the night of November 4 in parts of Dahanu, Thane and southern Gujarat. Some parts of south Gujarat may experience heavy rainfall on December 5. On November 5 and 6, northern parts of Mumbai should expect light to moderate rain.”

The Indian Coast Guard issued a warning to local fishermen to stay at home, and asked merchant vessels to exercise caution. “Though the cyclone is weakening, it is scheduled to make landfall in Maharashtra and Gujarat over the next two days. Keeping this in mind, we have advised fishermen to refrain from venturing into the sea,” a Coast Guard officer said.

Officials at the Indian Meteorological Department (IMD) said the cyclone Ochki was likely to weaken, before making landfall in Gujarat and Maharashtra sometime over next 48 hours. An IMD alert said, “The intensity of the cyclone is likely to weaken on Monday and Tuesday. Rainfall at many places with heavy rainfall at isolated places is very likely over south Gujarat on December 5. The cyclone is drifting towards Southeastern Arabian Sea at 14 kmph, and is expected to recurve and head towards Gujarat and Maharashtra.”

For Mumbai and its suburbs, the IMD predicted rain or thundershowers accompanied by strong and gusty winds at times over the next two days.

Mr. Palawat said sea temperatures in the northern Arabian Sea are cooler, which causes the storm’s intensity to reduce. He added that the storm should go from being ‘Very Severe’ to ‘Severe’ by November 5. Winds, he said, are expected to be 30 kmph and 40 kmph. “While the data available suggests the storm might weaken, there is always the possibility of it intensifying.”

The city is likely to be subjected ton strong surface winds during daytime, and showers are predicted to be light to moderate. Heavy showers are unlikely.