Compliance window for black money holders is no amnesty: FM

Mumbai, Mar 2 (PTI) In a case of fratricide, a CISF jawan deployed at a power plant in Maharashtra's Ratnagiri district allegedly opened fire, killing two colleagues and injuring himself and his pregnant wife. 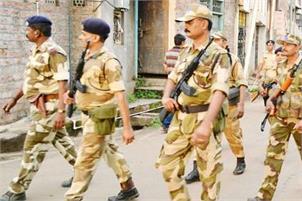 Gound, who hails from Madhya Pradesh, apparently engaged in a verbal altercation with the victims earlier, Patil said.

After firing, Gound threatened CISF head constable Balwan Baje Sing, 54, who was on duty, to keep his mouth shut, the officer said.

The deceased were identified as ASI Balu Ganpati Shinde, 58, who hailed from Malangaon in Kavathe Mahakal taluka of Sangli district, and Raneesh P, 28, who belonged to Kerala.

When his 30-year-old-wife Priyanka Kumari Gound was brought to the spot by CISF personnel to "calm him down", he got into a heated exchange with her as well for around an hour after which he fired on her and then self.

Gound and his wife have been admitted to the hospital in Chiplun and their condition is stable, Patil said, adding that Priyanka is seven to eight months pregnant.

Asked about what must have been the reason behind the assault by Gound, Patil said, "Preliminary information suggest that harassment at work must have prompted Gound to take the extreme step.