Mumbai (The Hindu): The collapse of the five-storey building in Berhampada, in which six children were killed, was reported to the fire-brigade control room around 1.40 p.m. on Thursday, civic officials said. Fire engines and ambulances were despatched from the Disaster Management Cell of the Brihanmumbai Municipal Corporation. 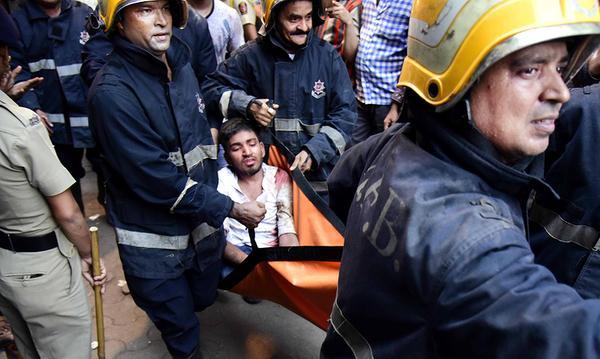 “Keeping in mind the large number of people staying in the slum, the Bhabha Hospital in Bandra and the Sion Hospital were alerted and asked to be prepared for a high inflow of patients. The National Disaster Rescue Force (NDRF) also rushed a team to the spot,” a civic official said.

“Reaching the collapsed structure with our equipment was a challenge as there is hardly enough space. This hampered rescue efforts,” said Assistant Commandant Mahesh Nalawade, NDRF.

The collapse triggered panic throughout the slum, with residents of nearby structures rushing out fearing another collapse.Several residents also joined the rescue efforts, clearing paths for the rescue vehicles and helping with carrying victims into ambulances.

Police cordon
The Nirmal Nagar police, meanwhile, imposed a cordon around the slum to prevent any outside interference with the rescue efforts.

The debris was cleared using earthmovers and people who were trapped underneath were rushed to the hospital as soon as they were found. Till 6 p.m., rescue workers had pulled out 10 victims from the rubble, of which six were declared dead before admission.

The dead have been identified as Ayesha Khan (12), Ali Khan (3), Osama Khan (14), Afeefa Sadaab (1), Areebi Khan (2) and Rusooda Khan (16), while the injured victims have been identified as Daulat Sheikh (50), Zulfikar Khan (18), Sakhiya Khan (35) and Islam Sheikh (17). The injured are being treated at Bhabha Hospital, and Zulfikar and Sakhiya are reported to be in a serious condition. Another victim, Abdul Sheikh (34), was injured while helping with the rescue efforts.

“The rescue operation is still under way and one more person is feared to be trapped under the rubble,” Mr. Nalawade said.