Mumbai, (PTI) As Mumbai braces for Cyclone Ockhi, areas near the metropolis witnessed a spell of hailstorm, while schools and colleges in the city and adjoining districts have been closed today as a precautionary measure. 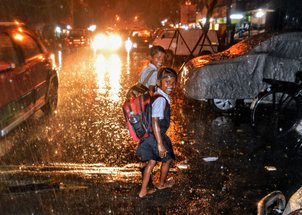 Some parts of the Munbai-Pune Expressway experienced a hailstorm early today, police said.

The weather department has forecast intermittent rains in Mumbai and suburbs in the next 24 hours.

The traffic on Eastern and Western Express Highways in Mumbai has slowed down after rain in some parts of Mumbai throughout last night.

There are traffic curbs in some places in view of the rush of followers of Dr Babasaheb Ambedkar on his death anniversary tomorrow.

The Brihanmumbai Municipal Corporation (BMC) has made arrangements for accommodation in some civic schools for people coming from outside Mumbai to pay tributes to Ambedkar at Chaityabhumi in Dadar area here.

"Intermittent rain/thundershowers very likely to occur in Mumbai and suburbs in next 24 hours," said a report of the India Meteorological Department (IMD) Mumbai at 8 am.

"Heavy rainfall is likely at a few places with squally wind speed reaching 50 to 60 kms per hour gusting to 70 kms per hour very likely along coastal area in next 24 hours," it further said.

A few spells of rain or thundershowers are likely to occur in the city and suburbs in next 48 hours, the IMD said.

After an alert by the IMD Mumbai observatory, the state government has announced a holiday today for schools in Mumbai, Sindhudurg, Thane, Raigad and Palghar districts.