Mumbai (The Hindu): The Sanatan Sanstha alleged on Friday that the CBI has picked up a “bogus and corrupt” witness against its member Dr. Virendra Tawde, arrested recently for his alleged role in the murder of rationalist Dr. Narendra Dabholkar. The Sanstha also named the witness and alleged that he had cases of cheating and misappropriation of Mahalaxmi temple funds pending against him. 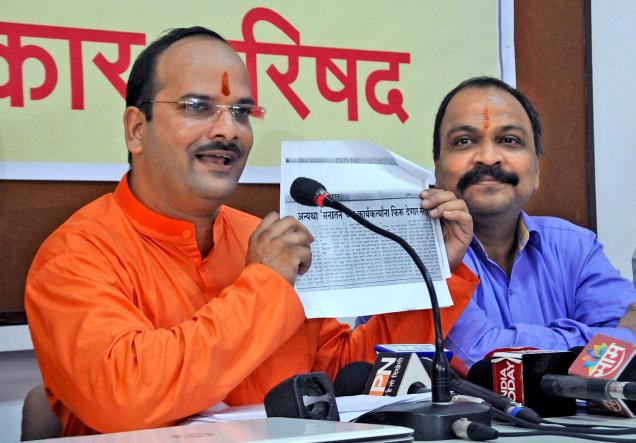 The Sanstha, nonetheless, described senior rationalists Govind Pansare and Dabholkar as “villains”, and said they indulged in “anti-social activities”.

Speaking to reporters on Friday, Sanatan Sanatha spokesperson Abhay Vartak said Dr. Tawade’s arrest is a conspiracy of the CBI. Mr. Vartak said the witness, Sanjay Sadwilkar, had misappropriated the silver ingots he was provided for the silver chariot of Goddess Mahalaxmi, and that he was even named in a report of the Kolhapur district collector in 2012. But there was no action taken against him as Mr. Sadwilkar enjoyed political clout, Mr. Vartak said.

Mr. Tawade’s lawyer Sanjiv Punalekar said his client was arrested on the basis of an ‘unidentified mail’ and ‘unidentified mobile’, and statements of bogus and corrupt witness. He demanded that a narcoanalysis test be done on Mr. Sadwilkar. The Sanstha produced documents including communication between Mahalaxmi Temple trustees on the alleged misappropriation.