Mumbai (The Hindu): After 82 days in a hospital in a city she had never visited before, where she lost over 350 kg, Eman Ahmed, once the world’s heaviest woman, will leave Saifee Hospital on Thursday for further treatment at Abu Dhabi’s Burjeel Hospital. When she had arrived in Mumbai for weight loss treatment in February, Ms. Ahmed had reportedly weighed over 500 kg. 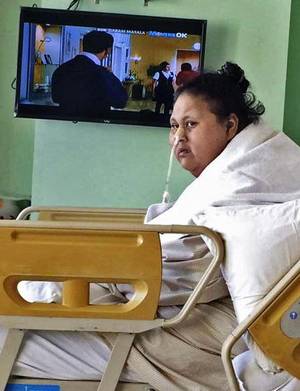 Dr. Shajir Gaffar, CEO, Burjeel Hospital said all arrangements have been made. “Patient safety is our main aim. She will fly out in the evening,” Dr. Gaffar, who was in Mumbai with nine colleagues from from VPS Healthcare, which runs Burjeel Hospital, said. The team held a long meeting with bariatric surgeon Dr. Mufazzal Lakdawala and Ms. Ahmed’s sister Shaimaa Selim on Wednesday.

“Each doctor from the team treating Eman has given us an evaluation summary duly seen and signed by the VPS team. All current medical reports, even her bed sores, have been put on paper and signed by them to maintain a record of her present condition,” Dr. Lakdawala said. The Abu Dhabi team has been requested to update him on Ms. Ahmed’s health at regular intervals, and have been advise to go in for a trial drug from the U.S.A. “We would love to be in the loop because we have an emotional bond with this patient,” Dr. Lakdwala said. “She held my hand and had tears in her eyes when I met her on Wednesday. She understands everything.”

From being bedridden at her home in Alexandria to being able to sit in a wheelchair, Ms. Ahmed has definitely come a long way. Immediately after her arrival in the city on an Air Egypt cargo plane, Ms. Ahmed was lifted by crane and taken to Saifee Hospital. There, she was put on a diligently-designed and customised treatment regime to bring various health issues under control.

After weeks of painstaking progress, the happy ending everyone was hoping for was replaced by acrimony, when Ms. Selim began blaming doctors at Saifee Hospital for not doing enough. This was apparently triggered by the hospital’s decision to send Ms. Ahmed back to Egypt after bariatric surgery. According to Ms. Selim, her sister should have remained at Saifee Hospital for a longer period, but Dr. Lakdawala and the medical team were of the opinion that she needed neurological rehabilitation and physiotherapy, which could be done back home.

The disagreement soon transformed into an ugly spat, and Ms. Selim decided to shift Ms. Ahmed to Burjeel Hospital in Abu Dhabi after consulting doctors there. The management there has promised to keep her in hospital for at least a year, and are also flying her mother, Thanaa, to be with her.

‘We did our best’

“When we brought her to Mumbai, she had a million and more health problems. Today, she is much better and will thus have a safer journey,” Dr. Lakdawala said. Huzeifa Sehabi, COO, Saifee Hospital said, “We will bid adieu to Eman from our doorstep. She will be backed by all our good wishes.”

In his medical summary, orthopaedician Dr. Satish Modi has made it clear that Ms. Ahmed will require several corrective surgeries to be able to stand, let alone walk. “If she does stand, she will require braces. We hope she walks one day,” Mr. Sehabi said.

Dr. Lakdawala has begun the process to bring seven morbidly obese children to Saifee hospital where the ward specially created for Ms. Ahmed is likely to be used for their treatment. The children, five from Gujarat and two from Maharashtra, are aged between three and seven and weigh 25 kg to 45 kg each.

“These are our baby Emans. We don’t want them to grow up and become like Eman, which is why we are planning an early intervention,” he said, adding that these children will be evaluated and put on a drug trial.