Mumbai, (The Hindu): Demand for Commerce surges ahead of Science, cut-offs at nearly 90% . The cut-off percentages for Class XI or First Year Junior College continued to soar this year, after the new admission system was introduced last year. The Education Department has allotted admissions to 12,05,68 out of the total 2,03,120 seats, roughly about 59% seats, in round one on Thursday. These included 72,054 students in Commerce, 34,840 in Science and 12,611 in the Arts stream. Over 2,447 students have already been admitted in bi-focal courses. 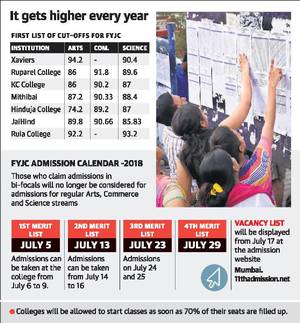 Many prominent colleges of Mumbai registered cut-offs for Commerce close to 90% on Thursday morning, when the first merit list was released. (See box on cut-offs of major colleges).

Demand for Commerce surged way ahead of Science. Prominent Commerce college R.A. Poddar in Matunga closed its admissions at 93% for the open category.

Shobana Vasudevan, Principal of R.A Podar College of Commerce and Economics said the cut-offs could actually rise in the second or third rounds and that there is a risk involved for students to not take the allotted college in this new system. “With the kind of fluctuations, students should be thoughtful to take admissions and not wait for preferences,” she said.

The new norms may have streamlined the process, but have put students in a corner. They cannot cancel admissions (to prevent floating of students) and have to pay the full year’s fees to claim admission unlike earlier, when they just paid Rs. 50 to seal admission.

Principals though felt the new system had brought in the much-needed discipline into the Class XI admission system. “Earlier, admissions would go haywire due to the constant hopping of students from one institution to another, since students had to just pay Rs. 50 for claiming admission. But now, with students being made to pay fees for the full year it helps serve as a deterrent,” said Lily Bhushan, Principal of KES Shroff College of Arts and Commerce. The new system of not allowing cancellation of admission would also streamline things, she said.

But the principals may have spoke too soon. Rohan Gupta, who secured 90.2 %, wanted admission into Sathaye College in Vile Parle but has been allotted a seat in Mithibai. Mr. Gupta said he would take admission in Mithibai and then keep trying for a seat in Sathaye. “I could not apply to other local colleges because I could not find those options in the online forms,” he said. Mr. Gupta said many of his friends prefer to wait for later rounds than take admission to institutions they are not happy with. Mansi Yelve, who scored 71%, failed to receive any college allocation and is awaiting her turn.

Mehak Gvalani, Vice-Principal of KC College, said the process will be completed in due course. “Our college got only about 90% of seats the allotted. However, we are sure seats will be filled in just two rounds and we should be able to start our term soon.” The seats, she said, are deliberately not filled at one go “in order to keep a margin for error or corrections.”