Nagpur, (The Hindu): Both Houses of the State Legislature were adjourned for the day on Tuesday, as the Opposition raised slogans against the State government over farmers’ issues. 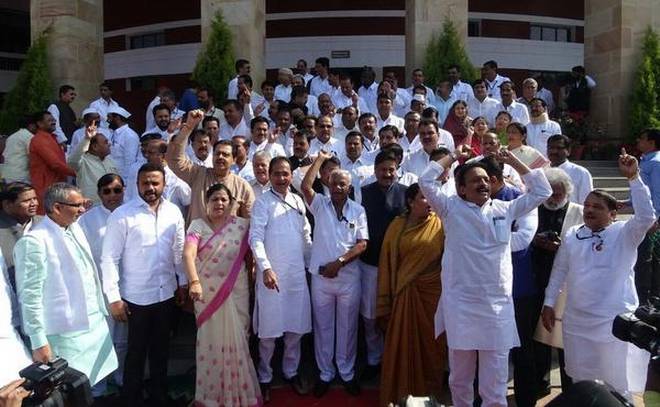 As soon as proceedings began on the second day of the winter session in the Legislative Council, Leader of Opposition Dhananjay Munde and other members began raising slogans against the BJP-led State government for ‘looting’ farmers, and sought relief for them. Protesting MLCs entered the well of House, prompting Council Chairman Ramraje Naik-Nimbalkar to adjourn proceedings for 30 minutes.

When business resumed, Leader of the House and State PWD Minister Chandrakant Patil requested Opposition members to let the House function, saying work from Monday was pending and important issues need to be discussed.

However, when Question Hour began, the Opposition once again rushed to the well of the House and began raising slogans, forcing another half-an-hour adjournment. When proceedings resumed for the third time, supplementary demands were tabled amid Opposition protests, and the House was adjourned for the day.

In the Assembly, Congress and NCP MLAs created a ruckus over the farm loan waiver scheme and issues faced by the agrarian sector. Opposition MLAs claimed the BJP-led government had failed to resolve farmers’ issues, and that the government isn’t acting to save the cotton crop, which is under attack by pink bollworm. The disruptions forced Pro-tem Speaker Yogesh Sagar to adjourn the House by noon, after Question Hour ended.

Talking to reporters outside the Assembly after it was adjourned, Leader of Opposition Radhakrishna Vikhe-Patil said, “Cotton is a major source of income for farmers in Vidarbha and Marathwada. The losses incurred due to the worm attack runs into several hundred crores. The government should compensate affected farmers.”

Before the day’s proceedings began, Opposition parties staged a protest outside, demanding immediate decisions to end the agrarian crisis in the State. Meanwhile, the Congress and NCP took out a rally in Nagpur over farmers’ issues.