Have not been asked to resign: Khadse

Mumbai (The Hindu): Sena says the Minister should step down from the post till inquiry into the allegations is over

State Revenue Minister Eknath Khadse on Thursday dismissed reports that the Bharatiya Janata Party leadership has asked for his resignation. He told reporters in Jalgaon that he would continue to work in drought-affected areas. 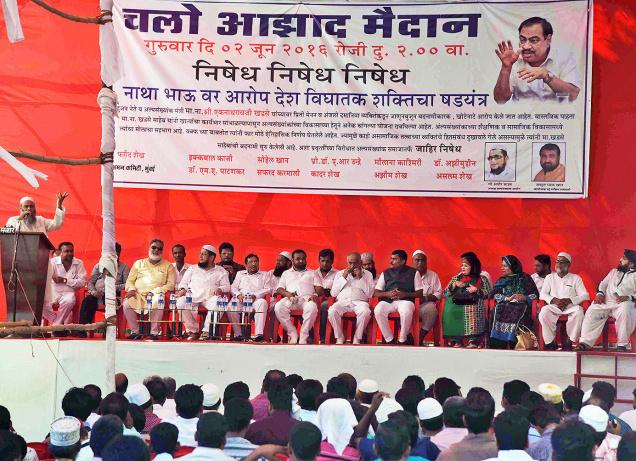 In the morning, posters paying tributes to deceased BJP leader Gopinath Munde on his second death anniversary sprang up across different parts of Mumbai. The posters carried only three names: Mr. Khadse’s and those of the late politician’s daughters, Rural Development Minister Pankaja Munde and MP Preetam Munde.

These posters clearly expose the division within the BJP by pitting the former Munde camp leaders against the present leadership of Chief Minister Devendra Fadnavis. However, no leader from the party claimed responsibility for the posters.

Mr. Khadse, however, suffered another blow after alliance partner Shiv Sena asked him to step down from the post until there is an inquiry into the allegations. Senior Sena leader and MP Sanjay Raut said, “Maharashtra’s tradition teaches us that the accused minister resigns and faces the inquiry.”

Asked whether the Sena is using the opportunity to settle previous scores as Mr. Khadse was said to be instrumental in breaking an alliance of both parties in the Assembly elections, Mr. Raut said his party does not hold a grudge against others. The Sena’s reaction has, however, not gone down well with the BJP. Party’s chief spokesperson Madhav Bhandari ticked off the Sena asking it not to interfere in the BJP’s internal matters.