If demonetisation fails, country will be pushed to anarchy, Raj Thackeray warns

Mumbai, (IANS) Maharashtra Navnirman Sena President Raj Thackeray launched a blistering attack on Prime Minister Narendra Modi for the November 8 demonetisation of high-value currency notes and warned that if it fails, the country will be pushed to anarchy. 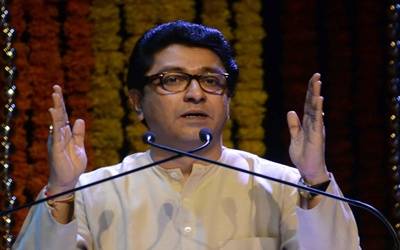 Questioning the government's assertions that preparations for demonetisation of 500 and 1,000 rupee notes were made 10 months in advance, Thackeray said if so, "then how come it (the new notes) bears the signature of the new (RBI) Governor (Urjit Patel)?"

"The BJP has still not submitted its election expenditure for the 2014 polls... If there was so much aversion to black money, how did Modi get elected," he asked, directly targeting the Prime Minister.

Denouncing the new decisions announced daily on money withdrawals or deposits in banks, Thackeray claimed it is evident now such a major policy was "rushed through" without making proper studies or adequate groundwork on the implications.

"I have spoken to people in the BJP, I have discussed it with RSS people, nobody seems to be happy about it, but all are keeping silent.. Even Mohan Bhagwat has not yet reacted on it... I wonder what's really going on," Thackeray observed, addressing a large meeting of party leaders and grassroots workers.

He demanded why action has not been taken against those hoarding black money and instead the ordinary masses are being punished and made to stand in long queues, and more than 40 people have lost their lives.

"There are few ads in the print media and on television there are only commercials by Patanjali (owned by Baba Ramdev)...we know where these come from," Thackeray said throwing dark hints.

"There was absolutely no planning or preparedness before Modi implemented the demonetisation... Everybody says it is good for the nation, but even the PM is not telling how we will benefit. We can only pray to God that something good comes out.. Because, it it fails, the country will be pushed behind by 20-25 years and be in severe crisis," Thackeray declared.

He said it's strange that those declared corrupt and jailed by the former Congress regime are now BJP leaders and the party's (Karnataka) MP Janardhan Reddy spent Rs 500 crore on his daughter's wedding earlier this week, and that too after demonetisation was implemented.

"I have read that the bride's sari cost Rs 17 crore...All this is beyond words," he said.

Training his guns on the Prime Minister, Thackeray said "in the morning, he makes an emotional speech in Goa, and in the evening he praises (Sharad) Pawar in Maharashtra."

"Modi says that he held Pawar's fingers to enter politics... But even Ajit Pawar (Pawar's nephew) held his uncle's finger and came to politics," he pointed out amidst laughter.

Thackeray said only four per cent of the population pays income tax and the rest carry out cash transactions.

Even (Finance Minister) Arun Jaitley made a declaration of Rs 82 lakh 'cash in hand' in his election declaration in Punjab - "I am not saying it is black money, but how will he deposit it in the changed circumstances now?," he asked