Kamat’s exit: infighting out in the open

Mumbai (The Hindu): Youth Congress, Mahila Congress plan a gathering today to convince him to withdraw his resignation

The infighting within the city unit of the Congress has again come to the fore following the resignation of senior leader Gurudas Kamat.

Mr. Kamat’s loyalists, who have been targeting Sanjay Nirupam, considered a ‘rank outsider’ in the party, have raised concerns over old hands being left out of the decision-making processes, following Mr. Kamat’s exit from the party. Senior party leaders said the exit has more to do with the internal changes in the party nationally, where the stress is on giving responsibility to youth leaders. 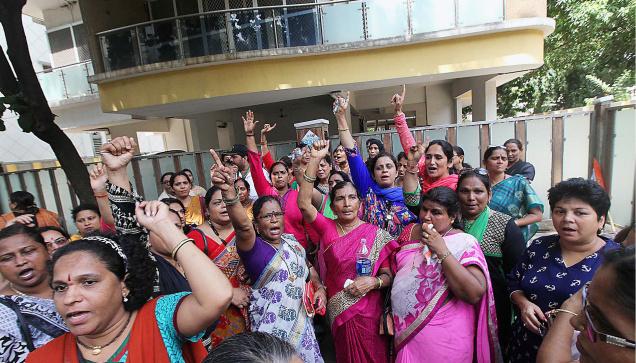 On Tuesday, Mr. Kamat sent out another message to supporters claiming he will continue to be involved in social work, and meet party workers and members on weekends. “Retiring from politics does not mean retiring from social work. I will be available for people minus the party tag for whatever help or issues need to be taken up with different agencies from this weekend,” he said, after resigning from all the party posts on Monday.

The senior leader said his resignation was purely on personal grounds, contrary to speculation that it was a pressure tactic to put the high command on the mat and submit to his demands. “I would also like to emphasise that I have the highest respect and regard for Congress president Sonia Gandhi and VP Rahul Gandhi.”

The Kamat camp ensured it pulled out all the stops to pacify the retiring leader. The city’s Youth Congress and Mahila Congress units announced a gathering at the party headquarters in Mumbai on Wednesday to convince Mr. Kamat to withdraw his resignation. Another voice against Mr. Nirupam was raised by former legislator and supporter of Congress leader Priya Dutt, Krishna Hegde, who wrote to the party high command slamming Mr. Nirupam’s ‘arbitrary’ appointments. Another supporter of Mr. Kamat, MLA Rajhans Singh said that the party must take the differences seriously and resolve them amicably. “Many people from outside are being given important responsibility. Why?”

However, the infighting within the Congress offered ample amusement to the opposition, which did not miss the opportunity to target Mr. Gandhi. “It is good for us if fine leaders like Mr. Kamat are allowed to quit. It is all thanks to Mr. Gandhi that we are left with little competition in the State or nationally,” senior Bharatiya Janata Party leader and Finance Minister Sudhir Mungantiwar said.