Maharashtra in favour of making Aadhaar must for school final exams

Mumbai (The Hindu): Aadhaar card has been made mandatory for students appearing for the Class X and Class XII examinations in February/March 2017. Students will also have to fill their Aadhaar numbers in the examination application forms, according to a recent statement issued by the Maharashtra State Board of Secondary and Higher Secondary Education (MSBSHSE). 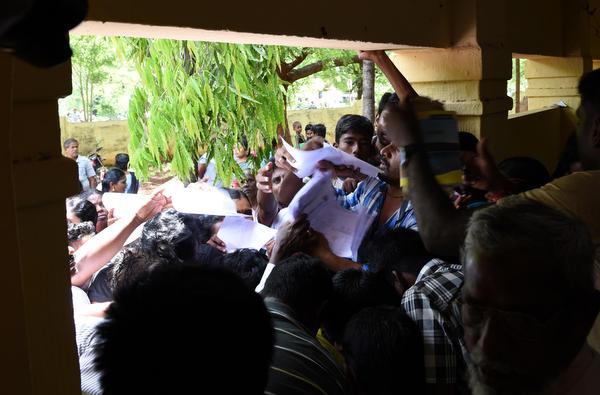 These forms are generally filled in around December every year. “We are intimating students and parents much in advance, to give them time to apply and get it,” said G.K. Mhanane, chairman of MSBSHSE. The board issued the statement on September 23.

Mr. Mhanane said for the last two years, students had been asked for Aadhaar numbers, but it was not compulsory. “This year, we are making it mandatory since we feel we have given them sufficient time to get it. Aadhaar would help us detect bogus candidates, who fraudulently appear in lieu of some other students. The number is important since we intend to link all students with Aadhaar and track their educational progress.”

When asked if students not having Aadhaar cards will be barred from appearing for the examinitions, he said, “We will not be able to bar students, but we are insisting that we want all of them to have Aadhaar.”

The State School Education department will be tracking the progress of students from Class VII, Class VIII and Class IX. It will also keep an eye on whether students of some particular schools are being deliberately failed in Class IX. This directive will have no bearing on the Class X examination of schools affiliated to CBSE or ICSE.

Advocate Rahul Narayan, who appeared in the Supreme Court against Aadhaar, said, “This is completely wrong on the part of the government, since the SC has clearly stated that Aadhaar cannot be made compulsory to get any kind of service. I would imagine that some students approach the court and get a stay on this order.”

“What about those students who do not wish to take Aadhaar or are not able to take it due to some technical malfunction of Aadhaar mechanism; after all biometric is not a foolproof system.”

But the teaching community is open to the idea. Seema Shaikh, principal of Pradnya Bodhini High School, Goregaon, said: “Last year, when the board had asked students for Aadhaar number in exam application forms, though it was not compulsory, it had us worried since many parents complained about not having it. We contacted the local corporator, who got an Aadhaar enrollment camp organised on our school premises. Almost all our students and 95 per cent of their parents were enrolled. We were prepared for Aadhaar made compulsory this year since we knew that such a decision was in the offing.”

The school has already made Aadhaar mandatory in their admission forms and school leaving certificates. “Other countries have some form of identification systems in place. If the government is trying to do something good, then why not be part of it?”