Maharashtra police at the receiving end

Mumbai (The Hindu): The Maharashtra’s police forces are alarmed by the rising graph of violence against their members. On August 25, Vilas Shinde, Head Constable with the Mumbai Traffic Police, stopped two men for riding a motorcycle without a helmet. One of them hit him on the head with a bamboo pole and he collapsed. After six days in Lilalavati Hospital’s intensive care unit, Mr. Shinde died. 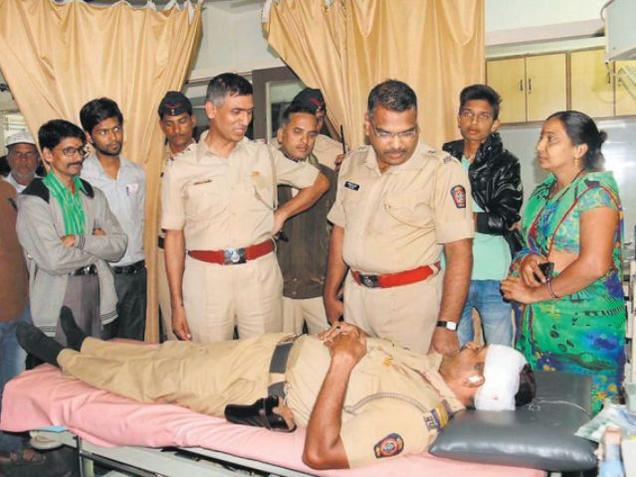 A week later, in the neighbouring municipality of Kalyan, police sub-inspector Nitin Dagale was monitoring a Ganesh immersion point at a lake. He told some youths to move along and not hold up the line; one of them jumped over the barricades and shoved him into the water, three other ‘devotees’ joined him and they tried to drown Mr. Dagale. (They did not succeed, and they are now in custody.)

Serious attacks on members of the police force are rare, but lesser assaults are not uncommon. In fact the number of incidents have been rising. According to the Leader of the Opposition in Maharashtra’s Assembly, Radhakrishna Vikhe Patil, there were 202 attacks on the police personnel in 2014, 284 in 2015, and 135 in 2016 up to May.

Ground-level policemen told The Hindu that they have observed a lack of respect for the uniform. One said, “A citizen wants policemen to be standing on the streets directing traffic in pouring rain and blistering heat, but does not want to be stopped for riding without a helmet. Every misdemeanour by the policemen — corruption, misuse of position — goes viral, but speedy detection of crimes and conviction rates hardly rate a mention on social media.”

An officer with the Thane Police said “Where someone does not think twice before attacking a uniformed cop, strict action is the only option. Kanoon ki dehshat hona galat hai, lekin darr zaroor hona chahiye [People terrorised by the law is wrong, but fear is necessary].”

Senior police officers admit that the trend has caused extreme concern, but were reluctant to name causes.

Mumbai Police Commissioner D.D. Padsalgikar said, “We have already put certain measures into place but I would not like to go into specifics at this point. I would prefer if the people get to see the results of these measures in the days to come as opposed to me talking about them.”

“There cannot be a blanket reason,” said Thane Police Commissioner Param Bir Singh. “Such incidents are a culmination of a lot of factors like the situation and the circumstances at a given point of time.” He was quick to add that following the Kalyan incident, thousands of Thane residents expressed their support for the police, in rallies and candlelight marches.

Retired State DGP K. Subramaniam, however, said some blame lies with the police themselves. “What we are seeing today is the result of gradual indifference towards enforcement of the law. If the police are only seen enforcing the law occasionally and selectively, it gives out a message that it is okay to break the law when no one is looking. The mentality festers and develops into something more serious.”

Strong message
Mr. Singh stressed the importance of measures needed to prevent such incidents, saying that strong sections of the law have been applied against PSI Dagale’s assailants. “We will also be requesting the government to fast-track the case to give out a strong message that such incidents will not be tolerated.”

And on August 7, Director General of Police, Satish Mathur, in a press conference, also focussed on the consequences of attacking policemen.

A single case will forever leave a record, he said, making it impossible for an accused to get visa clearances, and spoiling their chances of getting good jobs.