Mumbai (The HIndu): Water levels in dams have touched 6% of their capacity. Be it a minister or the Leader of Opposition, all political bigwigs in the state are currently on tour in drought-hit Marathwada and Vidarbha to inspect relief works. 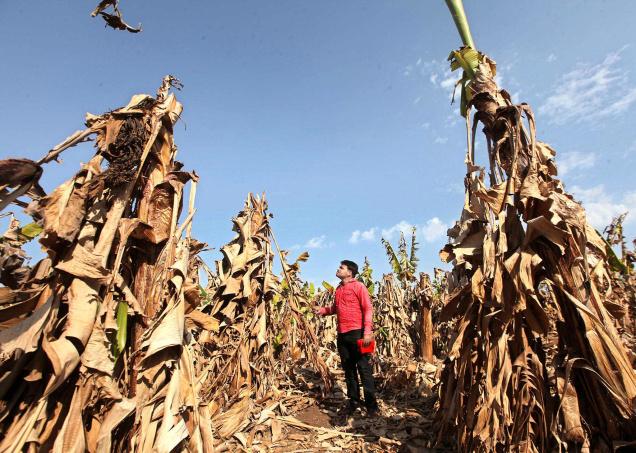 With the Budget Session set to get underway in a week’s time and water levels in Marathwada going further down, all cabinet and state ministers spent their Friday in the region, taking stock. With ministers assigned a tehsil each in Osmanabad, Beed and Latur districts — the worst affected — a few inevitably had to face farmers’ ire over delay in relief work.

On his visit to Nilanga in Latur, Chief Minister Devendra Fadnavis spoke of his government’s achievements in water conservation. He said, “I know farmers are suffering because of water scarcity since the last four years, and this is my third visit here. Today, every minister is visiting a tehsil to review the progress of our schemes. We are suffering because of nature as well as past mistakes. The water problem has never been addressed in a planned way,” he said, not missing an opportunity to take potshots at the previous Congress-NCP government.

The decision to send all ministers to drought-hit areas was taken two weeks ago, after water levels in dams in Marathwada reached 9 per cent of their capacity. While 2015 was the year that saw the highest number of farmer suicides, the trend continued in 2016 with around hundred farmers ending their lives in the first two months.

The government’s effort is seen as an attempt to nullify the Opposition’s aggressive mode, and the latter is likely to corner the government over these issues.

On March 4, when the state cabinet was touring Marathwada, dam water levels had already touched 6 per cent of capacity. On March 4 last year, the level was 17 per cent, while it was 36 per cent in 2014.

“Farmers have first right to the state’s treasury. We will not hesitate to spend on schemes to provide water for farming,” said Finance Minister Sudhir Munguntiwar in Beed district.

Leader of Opposition in the state assembly Radhakrishna Vikhe-Patil, who was in Vidarbha on Friday, accused the government of neglecting farmers. “This government is busy with Make in India events and spending money on them, but it has no money to spend on farmers. The Union Budget did not even mention rising farmer suicides in the state. People are angry and ministers visiting different tehsils are experiencing it first-hand,” he said.

Meanwhile in New Delhi, Union agriculture minister Radha Mohan Singh told the Rajya Sabha in a written reply that as many as 3,228 farmers committed suicide in Maharashtra last year, the highest in the last 14 years. “Of these 3,228 cases, 1,841 are eligible for ex gratia, while 903 cases aren’t,” he said, adding 484 cases are pending inquiry.