Mumbai (The Hindu): CM reiterates his government’s commitment to reservation for communities demanding it but fails to impress the Opposition, which staged a walk-out 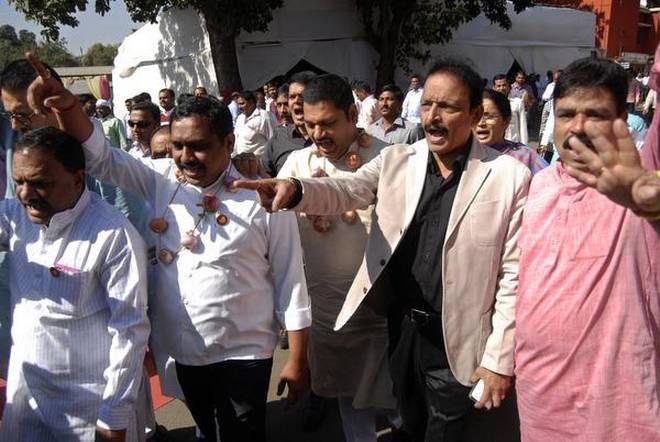 NAGPUR: Chief Minister Devendra Fadnavis on Friday made a detailed defense of his government’s stand on reservation, saying it is committed to providing reservation to communities in the State. Several, including the majority Marathas, are agitating for reservation. His explanation, however, did not go down well with the Opposition, which staged a walk-out in protest.

He also alleged “suspicious behaviour” by previous governments, citing the appointment of Ravsaheb Kasabe on the Bapat Committee, which had resulted in the stalling of reservation to the Marathas, as an example.

Maratha reservation was struck down by the court because the government could not show extraordinary circumstances needed to justify reservation, Mr. Fadnavis said. He added that his government has been studying the issue for some time now, and has taken advice from experts.

“We have also appointed two committees: the Tawade committee and one under the chief secretary. Senior lawyer Harish Salve has agreed to fight this case on our behalf without charging a fee. We have also collected all proofs of social and economic backwardness through scientific methods and a comprehensive affidavit, covering all the issues, has been submitted,” he said.

Mr. Fadnavis said all conditions imposed by the court have been fulfilled. “It took some time because we did not want to go without complete preparation .Our government thinks Marathas need the reservation and they should get it. It is our commitment and we are ready to do every single thing required.”

He said the Khopardi gang-rape, which triggered the Maratha unrest, has been given to a fast track court for trial and senior lawyer Ujjwal Nikam has been appointed public prosecutor. “The government wants death penalty for the culprits,” he added.

Allaying fears of the Dalit community, Mr. Fadnavis ruled out any dilution or scrapping of The Scheduled Caste and Scheduled Tribe (Prevention of Atrocities) Act, 1989. “The Atrocities Act was brought to give justice to the section which faced exploitation for thousands of years, and this Act is needed even today. This Act cannot be diluted, so forget about scrapping it. But there are allegations of its misuse. Anyone who misuses the Act cannot be a follower of Dr. Ambedkar. If you look at the complaints, the section is not at fault but the action is. We will form a House committee which will have 40 per cent SC/ ST members to see if its misuse could be stopped. But there won’t be a review of the Act.”

Mr. Fadnavis also said there will be no changes made to OBC reservation. While admitting that he had promised reservation for the Dhangar community within 15 days of coming to power in 2014, he hadn’t been informed about the “complete scenario”.

“The Tata Institute of Social Sciences has been assigned a research proposal, which will be sent along with the recommendation of reservation. It’s a constitutional process and we are fulfilling all our commitments towards this cause,” he said. Mr. Fadnavis added his government was not opposed to reservation for Muslims. “We won’t go against the court order if it upholds it [Muslim reservation].”