Mumbai (The Hindu): Wary of controversies over expenses in the time of drought, Chief Minister Devendra Fadnavis on Sunday cancelled his helicopter tour and took a seven-hour road trip in parched Marathwada from Aurangabad to Beed 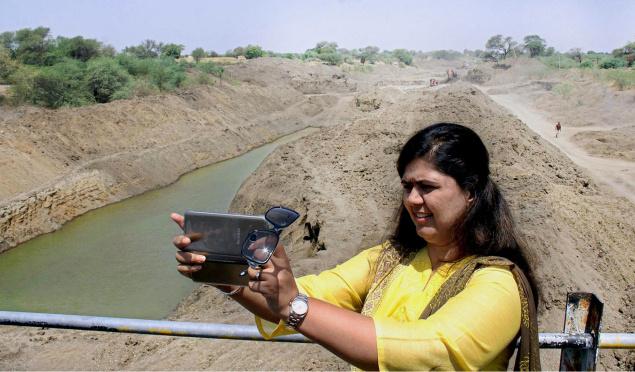 A helicopter ride to Marathwada by revenue minister Eknath Khadse three days ago had triggered a controversy with reports suggesting that 10,000 litres of water had been used to prepare the helipad for landing. He had travelled 40 km in Latur district by air.

Mr Khadse was criticised by the Opposition for wasting water at a time when wagon trains are being used to provide water to Latur.

“This is not practical. A helicopter ride would have saved time and led to faster decisions. The CM had to waste seven hours due to criticism in the media,” said Mr Khadse.

Another state minister, Pankaja Munde, too courted controversy on Monday after photographs of her taking a selfie during her visit to drought-affected areas were published.

While saying his chopper ride was justified as it helped to study the entire area, Mr Khadse also defended Ms Munde’s selfie in Latur. “Why is it being publicised so much? Why can’t the media see that we ensured over one billion litres of water to Latur? Media must co-operate the government in its fight to tackle drought,” he said.

Meanwhile, the Congress criticised the BJP over Ms Munde’s actions. “This is an insensitive government and it must change its slogan to ‘ ab ki bar, selfie sarkar’ . At a time when thousands of people are migrating from Marathwada, its ministers are busy taking selfies. We are not playing politics over it, but it seems that the government does not want to take us into confidence,” Radhakrishna Vikhe-Patil, Leader of Opposition in the Legislative Assembly, said.