Mumbai (The Hindu): The BJP, however, says under-attack Municipal Commissioner Ajoy Mehta is not to blame for bad roads, and was instrumental in unearthing road scam 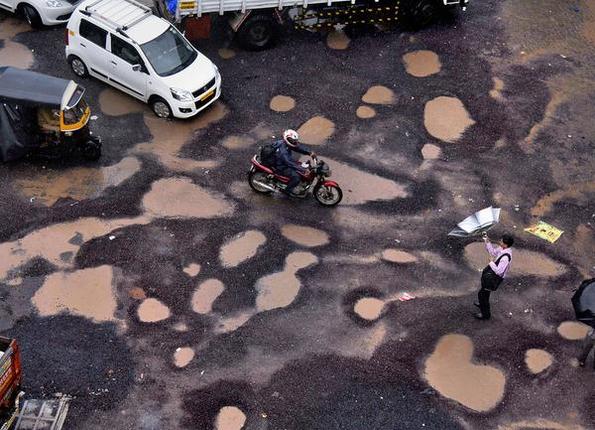 Amid uproar over the city’s pothole-riddled roads, Opposition parties have come out in support of the Congress’s announcement to bring a motion of no confidence against BMC Commissioner Ajoy Mehta in the next Standing Committee meeting of the Sena-ruled civic body. The BJP, however, is backing Mr. Mehta, saying he should be credited for exposing the multi-crore road scam.

The Congress, which is the principal Opposition party in the BMC, on Thursday announced its intention to bring a no-confidence motion against Mr. Mehta at the meeting on October 21. Trushna Vishwasrao, the Shiv Sena group leader in the BMC, said, “We are going to support the no-confidence motion being brought by the Congress because we feel the administration is playing its own politics.”

NCP group leader Dhananjay Pisal alleged that officials close to Mr. Mehta are “misleading the House and people on the number of potholes.” He added, “Under the leadership of the Commissioner, BMC has repeatedly set and missed deadlines to fill potholes. Officers close to him are saying there are only 35 potholes. The Commissioner should know that there are more that 100 potholes just outside the BMC headquarters, where he sits.” Mr. Pisal’s claim was echoed by Samajwadi Party group leader Rais Sheikh.

The Maharashtra Navnirman Sena (MNS), which has launched a scathing campaign against potholes, has warned Mr. Mehta that if all potholes are filled by Diwali (end-October), he will face the same protest that a senior civic engineer was subjected to last week. Chief engineer (Roads) Sanjay Darade was forced to hold a humiliating placard by MNS workers, that said he is responsible for potholes on Mumbai’s roads.

Sandeep Deshpande, the MNS group leader in the House, said, “We have given an ultimatum to Mr. Mehta that if the potholes are not repaired before Diwali, then our workers would make him stand with a placard stating he is responsible for potholes.”

BJP group leader Manoj Kotak, on the other hand, blamed the ruling Shiv Sena and the engineer-contractor nexus for the sorry state of city roads, while backing Mr. Mehta.

“Should Mr. Mehta be punished just because he unearthed a huge road scam in the city? Our party feels he should be felicitated for his act of honesty. The Shiv Sena and [civic] engineers are responsible for the pothole-riddled roads, and both are trying to mount pressure on the civic chief,” Mr. Kotak said.

Prior to his appointment as the BMC Commissioner in 2015, Mr. Mehta was Principal Secretary (Environment). — PTI